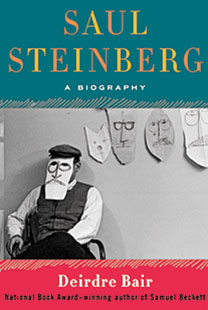 Lion-headed men in Brooks Brothers suits. Ladies with lipstick-slashed mouths and stilettos on gams that go up to their necks. A swirly typographical landscape of question marks. A confident 5 (male) and a dejected 2 (female) wonder how they can possibly be a good fit.

Saul Steinberg’s illustrations are among the most identifiable artworks of our age, at once puzzling and fascinating. His most famous image, View of the World From 9th Avenue, the cover of The New Yorker on March 29, 1976, has been endlessly adapted for other jurisdictions, and no wonder. It is a delight, and looks so simple: even if you have no artistic bent, it makes you want to grab a bottle of India ink and create your own Steinbergian “autogeography.”

Now, 13 years after Steinberg’s death, cultural biographer Deirdre Bair has produced a monumental study that illuminates this clever, sophisticated, difficult, intensely sociable but elusive New Yorker. It took her four years, and it wasn’t clear sailing: the Saul Steinberg Foundation allowed her to use only 35 of his images; a pity that, because readers of this first major biography would rather feast on his work than have it described in words, no matter how ably stitched together.

Bair tells her subject’s story well: the emotional effect of leaving his native Romania for Milan to study architecture, then, as a result of Mussolini’s racial laws, being uprooted from his new home and transplanted to the U.S. He travelled widely but was indelibly attached to New York, the locus of success, money and intellectual sustenance.

And women. During his 85 years, he loved three and was chronically unfaithful to them all, yet remained close to each. When he died, his wife, Hedda Sterne, was holding his hand. They had been separated for 40 years.

Steinberg got the fame he wanted and a place in the history of art all his own. As he explained it, “I am the writer who draws.”