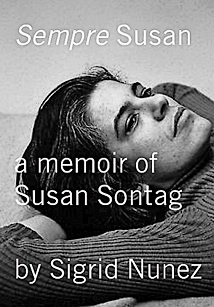 Anyone in need of perspective on meddling in-laws is advised to read Nunez’s riveting memoir. Nunez was a 25-year-old aspiring writer when she became Sontag’s secretary in 1976. The celebrated cultural critic, whose 1964 essay “Notes on camp” catapulted her to fame, was recuperating from breast cancer surgery and needed help. Soon Nunez and Sontag’s son, David Rieff, became lovers and Nunez moved into their shared Upper West Side apartment.

According to Nunez’s non-linear, razor-sharp recollection, a high-brow Three’s Company ensued. The hyperactive Sontag injected herself into their relationship, dropping by their bedroom late at night to chat. Lacking maternal or domestic instincts herself, she warned Nunez that fatherhood would “ruin” Rieff’s life, and doled out sex advice: “Why don’t you two just 69? Then you won’t have to worry about birth control.” Sontag’s bisexuality and famously close relationship with her son gave rise to rumours among the New York intelligentsia that the three were sexually involved, speculation Nunez doesn’t dignify with a response. She moved out the next year but stayed with Rieff a year longer in a relationship she realizes was doomed even without his mother’s interference.

What drew Nunez to Rieff is never explored, explicitly. Her focus is on Sontag—imperious, needy, egocentric, insecure, rude (punctuality was “servile”) and complicated. But she could be an inspiring, instructive mentor too, Nunez writes, eager to dispense advice, even when it wasn’t wanted: “ ‘Stop letting people bully you,’ [Sontag] would bully me.”

Six years after Sontag’s death, Nunez appears to be wrestling with the instruction, if the vividness of Sontag’s voice and occasional bursts of seemingly unresolved resentment are any indication. It’s likely Sontag, who valued “seriousness” above all, would be furious with Nunez for sharing the details of her hair-dying and work habits. But there’s nothing trivial about Nunez’s smart, wry and often sad examination of Sontag’s private life. In stoking Sontag’s mythology while putting herself at its centre, Nunez has clearly learned much from the master.