REVIEW: Soundings: The Story of the Remarkable Woman Who Mapped the Ocean Floor 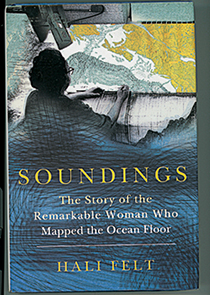 The ocean covers more than 70 per cent of our planet, yet the vast majority of it remains unexplored. We’ve mapped the moon, Venus, and Mars in greater detail than Earth, notes Felt; a large part of what we do know comes thanks to a little-known American scientist named Marie Tharp. In a new biography, Felt portrays this enigmatic woman, who along with partner Bruce Heezen, was the first to create a global map of the ocean floor.

In 1948, Tharp, then 28, presented herself at the new geophysical lab at Columbia University. With degrees in math and geology, Tharp was a catch, but this was an all-male team; she was put to work interpreting soundings (sonar pings that measure ocean depths). Using this data, she and Heezen created their map, and revealed a rift valley that runs over 64,000 km along the ocean floor. It might be the largest geologic feature on Earth, and its discovery laid the foundation for proving the then-controversial theory of plate tectonics.

When Tharp began to map the rift valley, Heezen was dismissive. He eventually came around, and went on to earn far more credit for their work than she did. As a woman, Tharp was prevented early on from going out on research expeditions; later in life, she railed against those who implied she’d stumbled upon the rift valley, or found it by accident. This biography feels like the author giving credit where credit is due.

Felt relies on papers, photographs and the memories of others to sketch a portrait of Tharp, who died in 2006; the nature of Tharp’s relationship with Heezen remains a question. The two scientists, who never married, were variously described as long-time friends or lovers, and when Heezen died, he left half his estate to Tharp. Whether this was a great friendship or an unconventional romance is never clear, but Felt leans toward the latter. Like Tharp relying on acoustic pings to map the bottom of the ocean, Felt draws an impressionistic portrait, taking what she knows and extrapolating from there.