REVIEW: Squeeze this!: a cultural history of the accordion in America 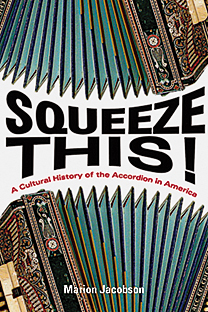 As musical instruments go, the accordion is an odd duck. It has both bellows and buttons, reeds and keys. It’s cumbersome but designed to be portable. It’s stylistically versatile, but its sound stands out in any ensemble. Its detractors are legion, but even its proponents disagree: is it the homely instrument of the common folk, or a testament to human ingenuity and a vehicle for self-improvement?

Jacobson, an ethnomusicologist who started playing the accordion in Brooklyn 10 years ago, has a convert’s zeal and a scholar’s erudition. Her book is an academic resource, a detailed history, and a quirky travelogue through U.S. folk festivals. Though its prose may strike a few bum notes, it tells us how the story of the accordion echoes and amplifies aspects of American history.

Squeezed in between a dense beginning and a rambling last chapter are a number of thought-provoking insights and mini-biographies. Jacobson takes us from the instrument’s 19th-century genesis in Austria and Italy to its early 20th-century arrival on American shores, then through the development of the “accordion industrial complex.” She details its early-1950s heyday, its precipitous decline after the rise of the guitar, and finally its resurrection of sorts among Brooklyn hipsters, San Francisco devotees and alternative rock bands across the country.

Jacobson’s narrative suggests how capitalism helps shape cultural identity, as early accordion schools and sheet-music companies promoted original folk tunes to working-class children of immigrant families. She explains how the accordion has established itself as at once Czech-American, German-American, Italian-American, Scandinavian-American, and Mexican-American—and how more recently it has become an outsider’s instrument of self-definition. Time, then, to roll out the barrel and uncork the champagne: with this book, the lowly squeezebox has begun to get its cultural due.

FILED UNDER: book review bookmarked Marion Jacobson Squeeze this!: a cultural history of the accordion in America