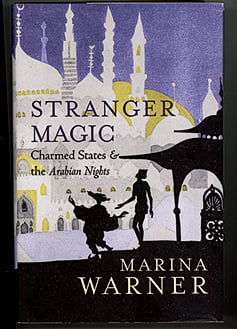 For all the author’s slides into academic speak—she calls the Arabian Nights “a polyvocal anthology”—her subject, the world’s best-known and, probably, best-loved story cycle, is enchanting enough to overcome anything. There can scarcely be a soul in the Western or Islamic worlds who doesn’t know the framing tale of 1001 Nights: how Sultan Shahriyar, betrayed in love, takes a virgin bride every night and beheads her in the morning, until he weds Shahrazad, who compels him to issue interminable stays of execution so he can hear the endings of the stories she tells him. In short, the most profound affirmation of the literally life-affirming essence of stories and storytelling ever put to pen.

The tales she tells have sources stretching from Persia (as the names of the sultan and his bride indicate) across the Arab world to as far as India. Their themes are eternal: the wiles of women (Shahrazad herself), the caprices of tyrants (her sultan), and, above all, the twists of fate: beggars become kings, princes are turned to stone. And as soon as they came west in the early Enlightenment, the stories became one of the very few foreign jewels ensconced in the Western literary tradition.

Warner’s own framing story—the Western reception of the Arabian Nights—has tales within tales too. Mozart, given a copy by his Italian landlady, developed themes for The Abduction from the Seraglio; Coleridge read them before he wrote “Kubla Khan”; Dickens had Scrooge try to catch the Ghost of Christmas Past with a candle snuffer, an update of enticing a genie back into his lamp. Then there’s the most important Westerner of all, Antoine Galland, who brought the stories back from the Ottoman Empire in 1704. Modern scholars have concluded that he actually wrote two of the most popular tales, “Aladdin” and “Ali Baba.” And why not? There’s always time and space for another story.