REVIEW: The Aleppo Codex: A True Story of Obsession, Faith, and the Pursuit of an Ancient Bible 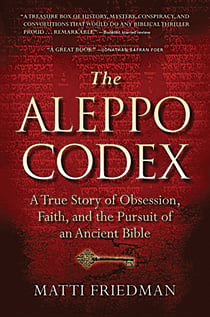 Many medieval manuscripts have obscure pasts, but the Aleppo codex has a history that only became murky in the 20th century. A bound copy of the Tanakh (the Hebrew bible) more than a thousand years old, the codex was always considered the most authoritative representative of the tradition by which the Jewish Scriptures have been preserved. We know when and where it was made—by Shlomo Ben Buya’a, known as “the swift scribe,” and the renowned scholar Aaron Ben-Asher on the shores of the Sea of Galilee around 930 CE.

And we know where it spent the next millennium—first in the Holy Land until it was looted from Jerusalem by Crusaders in 1099, then for three centuries in Fustat (now part of Cairo), whose Jewish community ransomed it from the Christians, and then for 600 years within the ancient Jewish community in Aleppo, Syria, after the keeper’s family moved there. What we don’t know is what happened to it between 1947, when Arabs enraged by the UN vote to establish Israel burned down Aleppo’s Jewish quarter, and 1958, when the codex was smuggled into Israel.

It was presented to Itzhak Ben-Zvi, president of Israel, and a furious group of the Aleppo Jews living in Israel launched an unsuccessful case in rabbinical court to recover their property from the state. The records of the lawsuit were suppressed for decades. When Friedman unearthed them, though, he gained an inkling why. When the manuscript went on public display in 1960, it was missing close to 200 of its 500 leaves, a loss the government said had occurred during the codex’s hidden years. Yet none of the claimants in rabbinical court even mentioned the shocking mutilation. Friedman’s painstaking investigation of just what happened to the Aleppo codex—and when—is a fascinating account of the role of sacred relics in creating a national identity, and also of the lure of old and treasured objects.