REVIEW: The Billy Bob Tapes: A Cave Full of Ghosts 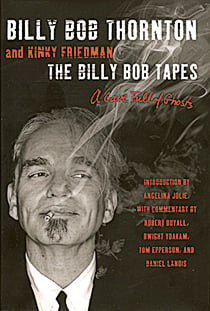 Among Canadians, Billy Bob Thornton’s claims to fame would include his breakout movie Sling Blade, his TMI marriage to Angelina Jolie, and his obnoxious, prickly star turn during a CBC radio interview. Now a funny-sad oral history of his life offers insight into two, if not three, of these milestones.

Notably absent is any dish on Jolie, who contributes an affectionate foreword in which she calls her ex “the hillbilly Orson Welles.” Thornton admits he messed up the marriage because Jolie was “too good” for him. He also kills a myth: the couple never wore vials filled with each other’s blood, he insists; they were lockets smeared with a mere drop of blood.

Billy Bob prides himself on not talking trash about others, an estimable quality in a human being, less so in a memoirist. “I don’t think it’s good to talk bad about people, I never have,” he says. He makes up for it by telling tales about himself—his exploits as a squirrel-shooting youth in Arkansas, the empty-refrigerator L.A. years and his ambivalence about fame. A bowel-exploding episode on a Greyhound bus is pretty memorable, as is a rant about the idiocy of Facebook. And he has a way with one-liners: “You could put an ankle bracelet on a kangaroo and I would hit on it,” he says of his randy adolescence.

What makes this memoir unexpectedly compelling is Thornton’s candour—about his insecurities and neuroses, about being a jerk sometimes, and his frustration that he’s only known as a musician because of his big-screen fame, hence his CBC meltdown (which doesn’t make the book). He also thanks all who encouraged him, from his high school drama teacher to director Billy Wilder, who gave the struggling actor advice when he was serving drinks at a Hollywood party: forget about becoming an actor, Wilder told him, and write your own characters. This book is proof that Billy Bob listened.