REVIEW: The Boy Kings: A Journey into the Heart of the Social Network 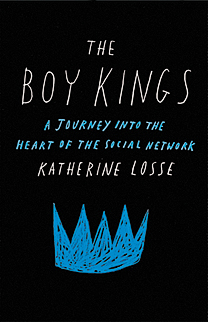 In 2005, Losse became the 51st employee at Facebook and felt like the “token” female surrounded by “Harvard computer bros.” She was a failed literature grad student who stumbled into a job moderating hate and creep speech for the fledgling site. She eventually became the virtual mouthpiece for the “little emperor” himself, CEO Mark Zuckerberg. As the company boomed, her doubts about its mission grew, but so did her paycheque. After five years, she cashed out and now offers a humanist mea culpa for her complicity in world conquest by engineers.

It is perhaps unsurprising that a company founded by young men and overwhelmingly populated by male engineers boasted an “unrepentantly boyish company culture.” She recalls office playgrounds filled with tactless man-boys playing with expensive toys and sending her obnoxious instant messages; they had nothing but disdain for non-technical staff who made a fraction of their salaries. Losse resented the fraternity feel, but she didn’t let it show too much, lest it compromise her unlikely ascent up the company ranks.

Work devoured most of her life; outside of it, she stopped seeing faces and saw potential Facebook profiles. Her skepticism about the merits of connecting everybody and sharing everything took root. She developed inconvenient concerns about privacy and authenticity. At times, her lament can get a bit rich—“I was starting to wonder exactly who my friends were”—but mostly she reflects thoughtfully about her time promoting a medium that converts real life into grist for virtual performance. Alas, it turns out “instant, distant communication” can’t solve loneliness.

Losse throws her fair share of uppercuts at Facebook’s “technical cult,” “nouveau totalitarianism” and “digital surveillance.” Still, she doesn’t hide her gleeful diva moments with an expense account as she hopscotched the globe in first-class to spread the good word of technological progress. This leaves the reader wondering whether Losse is a smug hypocrite or an earnest critic who achieved unlikely success in an unexpected job and left a bit wiser and a lot richer.