REVIEW: The Day the World Discovered the Sun 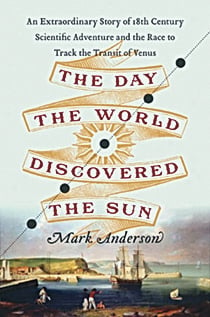 Seventeen years after its publication, Dava Sobel’s smash hit Longitude is still begetting science-history costume dramas that garnish struggle and intrigue with a sprinkling of nutritious nerdery. This one’s about the transit of Venus, an astronomical phenomenon that occurs in pairs every century or so when the planet Venus is positioned in a common plane with Earth and the sun. That allows earthlings to see the disk of Venus hovering across the sun’s face. The next transit, paired with one observed in 2004, begins on the evening of June 5, 2012. (The next one after that won’t arrive until Dec. 10, 2117.)

The laws of planetary motion worked out in the 17th century enabled astronomers to reckon the distances between Earth, the sun, and other planets. But these distances, given Kepler’s laws, were only calculable as ratios. No one had a yardstick allowing for the measurement of absolute distances: how many miles away is the sun? Without radar or other modern technology, lugging quadrants and telescopes to the four corners of Earth during a transit of Venus provided the only opportunity for an accurate estimate.

This fact was realized in 1663, with the next transit 98 years away. But poor weather fouled things up in 1761. The second transit of that pair, in 1769, was a generation’s last chance. That set the finest minds in Europe dashing off, to risk terrifying sleigh rides in the Siberian wilds, shudder with hypothermia in the Norwegian Sea, and hallucinate in the grip of “jail fever” in Mexico. Not all would return alive to the comfortable salons of royalty. It’s a heck of a yarn—a sort of real-life literal Star Trek from the era of tall ships, terra incognita, and scientific Enlightenment.