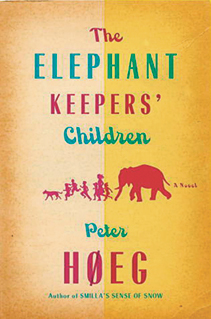 The narrator of this rollicking novel by the author of Smilla’s Sense of Snow opens the book with a promise. “I have found a door out of the prison,” declares 14-year-old Peter Finø. “I am writing this to show you that door.” He speaks of escaping our hidden desires, the “elephants” we carry around that we keep secret from others—a yearning to be the world’s best soccer player, to never have anyone in your family change. Before revealing the path to the door, Peter recounts a lengthy caper in which he and his older sister, Tilte, are chased around their idyllic (and fictional) island home of Finø and through the streets of Copenhagen by a stern bishop and a wayward psychologist who want to place them in state custody: their father, a God-doubting vicar, and mother, a mechanics-obsessed organist, have disappeared.

Along the way, Peter and Tilte reach out to friends with such names as Polly Pigonia and Leonora Ticklepalate and trick their meddling principal into believing he sees the dead.

The plot takes unnecessary detours and there are too many characters to count, but Peter is delightful. His worship of Tilte is near total—though he hasn’t quite forgiven her for helping his nemesis, Karl Marauder, lure him onstage for a soccer trophy, only to find himself a half-naked contestant in the island’s annual “Mr. Finø contest.” And what an eye for detail: when a pursuer is able to gain ground after being hit in the face with a layer cake, Peter surmises the base “must have involved some kind of walnut meringue.”

Existential, farcical, slapstick—whatever the word for Høeg’s latest offering, it captures a truth adults often forget: life is at once ridiculous and beautiful, full of meaning and so much nonsense.