REVIEW: The end of your life book club

Book by Will Schwalbe 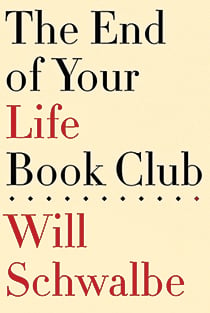 In 2007, Will Schwalbe received the kind of news that stuns every child: his mother, Mary Anne, had been diagnosed with pancreatic cancer. With rare exceptions (such as Steve Jobs), those who suffer from the disease have very short life expectancies. Mary Anne was a perpetual traveller who tirelessly volunteered for non-profit organizations in Third World countries; the news was a difficult blow. But in the course of her treatments, Mary Anne and Will hit upon a novel way to spend time with each other: a two-person book club.

Schwalbe’s chronicle of what they read as the cancer did its awful damage is a moving reflection on parents and children and the power of the written word. Each chapter is devoted to one of their picks, as varied as John O’Hara’s Appointment in Samarra (which kicked off the book club) and Josephine Tey’s mystery novel Brat Farrar to Joan Didion’s sober reflection on widowhood, The Year of Magical Thinking. Each book gives mother and son a chance to learn about each other in a deeper way, but the club also helps Will to come to grips with his own life. Cementing his relationships with his partner and siblings, he leaves his job for a startup and later moves on to other rewarding, if less financially secure, projects.

Despite the grim subject matter, The End of Your Life Book Club is not depressing in the least. Instead it is full of warmth, love, and much-needed humour. As a bookish person who recently lost a parent to cancer, I took tremendous comfort in it. And I can’t think of higher praise than that my mother, to whom I lent an advance copy, loved this book as well.

FILED UNDER: bookmarked The end of your life book club Will Schwalbe