REVIEW: The Energy of Slaves: Oil and the New Servitude 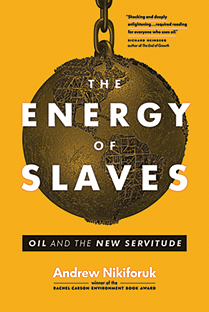 The master-slave relationship humanity has with fossil fuels is complicated, to say the least. Nikiforuk’s slow-boiling polemic opens with the thought-provoking observation that the end of slavery in the New World coincided with the flowering of the age of coal and oil. The new fuels spelled the end of mass human muscle power as the engine of all large-scale projects, from the pyramids to plantation agriculture. There are any number of sobering lessons to be drawn from that idea, including the fact that dawning moral awareness wasn’t the only factor in abolishing human bondage in the West, but it’s not oil’s liberating power that Nikiforuk wants his readers to consider.

Each of us in the developed world now commands energy—to feed, clothe, warm, cool, transport and entertain ourselves—equivalent to that of a Roman patrician with almost 100 slaves. And we would be just as helpless without it as that nobleman would be without his slaves. Fossil fuels have utterly transformed our lives in just a few generations, and now that we are aware of their increasing environmental and financial costs, Nikiforuk declares, we are demonstrating the same blinkered denial as any ancient slaveholder because we are just as shackled to our easy living. Who is the master here?

The Energy of Slaves offers a profoundly moral case against the diminishing returns now offered by oil dependency, even while its author briskly dismisses the possibilities of maintaining our new slaves with different, cleaner and more renewable energy sources. “Meeting one-third of the world’s current energy needs with wind power would require approximately 13 million towers occupying three million square miles,” he writes. Practically as well as morally, argues Nikiforuk, the only way out is reducing energy demand, a call as radical as abolitionism was two centuries ago. Energy emancipation will be as difficult, halting and unpredictable as its human forerunner proved to be, and just as inevitable.