A dull gloss on the final assault 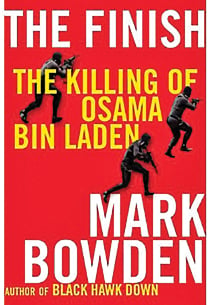 The killing of bin Laden by an American Navy SEAL commando team seems like a topic well-suited for author Mark Bowden, whose previous books have tackled the 1993 “Black Hawk Down” gunfight in Somalia, and the Iran hostage crisis. But while Bowden’s Somalia story bursts with action, and his book on Iran is rich and detailed, this one feels thin. Part of this can’t be blamed on Bowden. Members of the SEAL team on the raid wouldn’t talk to him, which gives Bowden’s account of the final assault on bin Laden’s compound in Pakistan a dull gloss. It also forces Bowden to focus the bulk of his attention on the long hunt for bin Laden, and the political decisions surrounding the raid, and here Bowden is stronger.

He opens his narrative in Iraq. A special-forces unit hitting a suspected al-Qaeda target found a treasure load of information: names, photos, travel documents, even expense reports for phone cards. This wasn’t the breakthrough that directly led to bin Laden’s discovery. But Bowden uses it to illustrate how America’s counterterrorism capacities have evolved since 9/11. Every scrap of data is stored on supercomputers that can find links between fragments that would otherwise go undetected.

American military and security agencies have learned to respond to this intelligence with speed and force. Bill McRaven, then-commander of Joint Special Operations Command, was unfazed when told where bin Laden might be hiding. His men had perfected their skills on thousands of similar missions.

The administration of President Barack Obama claims torture wasn’t a factor in finding bin Laden. Bowden says this isn’t true. Bin Laden’s courier, a man known by the pseudonym Abu Ahmed al-Kuwaiti, was a key figure in the hunt. He was first mentioned by two al-Qaeda operatives subjected to coercive interrogation methods. Bowden says one was “probably” tortured; the other suffered treatment at Guantánamo that “would be described as torture by any disinterested person.” The third person to mention Kuwaiti was 9/11 architect Khalid Sheikh Mohammed. He was waterboarded 183 times.