REVIEW: The Good Girls Revolt: How the Women of Newsweek Sued Their Bosses and Changed the Workplace 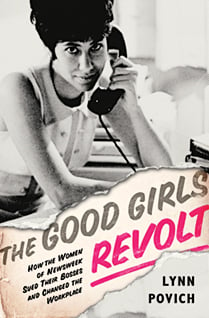 Nora Ephron once wrote about applying for a job in the Newsweekmailroom after she graduated from university in 1962. When asked about her career aspirations, Ephron said she hoped to write for the newsmagazine one day. She got the job, and a cold slap of the era’s double standard: “Women don’t write for Newsweek,” she was told.

That misogynistic mindset was precisely what Povich and more than 60 of her female colleagues bravely went up against when they launched a sexual discrimination lawsuit against the magazine’s management in 1970. Povich’s memoir of the tortuous, landmark battle that paved the way for a generation of female writers and editors is illuminating in its details—and a reminder that a Mad Men mindset extended into the ’70s and liberal media outlets like Newsweek, which had a female publisher in Katharine Graham.

Povich, who began as a secretary and rose to be Newsweek’s first female senior editor in the 1980s, details how the lawsuit transformed her from a “good girl” to politicized feminist. So it’s surprising how blithely she skips over the sexism that exists in media today. In her prologue, Povich writes of female Newsweek staff contacting her in 2010 to complain about on-the-job discrimination. Yet she offers little more incisive analysis than that feminism remains an “incomplete revolution.” It’s as though her subtitle’s upbeat claim that the Newsweeklawsuit “changed the workplace” makes her reluctant to admit more change is needed, or that affirmative action can have insidious consequences. Still, Povich’s account casts valuable perspective on a trail-blazing case that shouldn’t be forgotten. It never did help Nora Ephron, though. She was promoted to news “clipper” before becoming fed up with the place and going to work for a newspaper where they did let her write. Her way worked too.