REVIEW: The I Ching: a biography 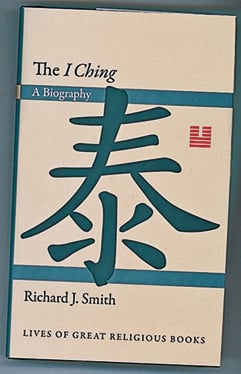 Foreigners, even foreign devotees—and they have been legion over the centuries—find The Classic of Changes fundamentally hard to engage with. Everywhere else among the world’s great civilizations, the foundational texts—the Bible, the Quran, the Bhagavad Gita, the Popol Vuh—are fundamentally narratives. They explain, or at least describe, ultimate reality via a storyline about the aims and actions of God (or the gods). Not the I Ching, the ancient Chinese text that Smith, following the current Pinyin transliteration system, usually renders as the Yijing. Taking shape about 3,000 years ago, the Yijing consists of 64 six-line symbols, all distinguished from one another by their pattern of solid (—) and broken (- -) lines. The first two hexagrams, for example, are Qian (six unbroken horizontal lines) and Kun (six broken lines). The other 62 are permutations of the first two.

From the outside looking in, hexagrams make pretty thin gruel for crafting a story, our species’ default means of making sense of otherwise random forces and events. But for millennia the Chinese, from emperors to peasants, have seen the book of nature writ clear in the Yijing’s lines. They have ceaselessly plumbed it to understand natural cycles of ebb and flow—crucial information for a culture in which, as Smith notes, the ideal has always been “to do the right thing, at the right time, in the right place, facing the right direction.” And just as entire libraries of theological tomes have followed upon four thin Christian Gospels, over time the hexagrams have spawned the narrative elements they required—names, brief descriptions of what they represented and commentaries.

Ever since the Han Dynasty declared the Yijing a Confucian classic in 136 BCE, it has infused not just Chinese art but science as well. Today Chinese scholars see relationships between the hexagrams and atomic structure, the patterns of the human genome and the eight-tier matrix of linear algebra. Their Western influence has stretched from Carl Jung’s psychology to I.M. Pei’s architecture. As Smith demonstrates, in a rather premature “biography,” the Yijing remains vibrantly alive.

FILED UNDER: book review bookmarked Richard J. Smith The I Ching: a biography