Edited and with an introduction by Hunter Davies 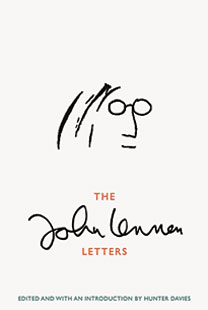 Just when you thought the last scrap had been scavenged from the Beatles’ apple, along comes this compendium of Lennon’s missives, postcards, autographs and, yes, shopping lists. Surely, as George Harrison once sang, it’s all too much?

Well, not quite. Thirty-two years after his death, the Lennon that most of us think we know is a rock ’n’ roll myth, and this handsome tome helps to humanize him. Davies, authorized Beatles biographer and Lennon confidant, has gathered 286 personal documents, most of which are reproduced in colour. Some are typed—badly, with apologies—but the majority are handwritten, and illustrated by comic doodles. Having studied art, and being an avowed disciple of The Goon Show’s surreal comic genius Spike Milligan, Lennon infused nearly all of his correspondence with a manic creativity and visual flair. One can read the letters in their transcribed versions by Davies, but it’s more fun to pore over the originals.Granted, Lennon could be ornery (to correspondents he perceived as didactic), defensive (to critics of work by his wife, Yoko Ono), cavalier (to relatives who brought up his faults), sententious (to anyone who asked him about the Maharishi Mahesh Yogi) and, occasionally, downright nasty—especially in letters to Paul McCartney that now read like fleshed-out versions of celebrity Twitter spats. Nonetheless, he’d sign most notes with “love” and a drawing, and always offer a genuine bit of himself.

Many of these documents are addressed to fans whose letters he would apparently randomly pick out of massive piles of fan mail. His direct engagement with their questions shows a rare generosity of spirit. This is why it’s heartbreaking to see Lennon’s inscription on a copy of The Catcher in the Rye, signed for his assassin just hours before Mark David Chapman shot him. We all know his sudden death was a terrible artistic loss, but this book makes it clear, more than ever, how lamentable it is that we lost Lennon the man.