REVIEW: The Lifespan of a Fact 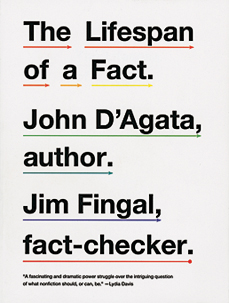 The faceoff/collaboration between writer and fact-checker is invisible to most magazine readers, but stick-in-the-eye obvious to anyone who has toiled on either side of that divide. Umpired by an editor viewed as a slippery ally at best by both sides, such clashes often bring to mind Bismarck’s remark about sausages and legislation—reader, sometimes you don’t want to know what goes into the making of a magazine article—and are fodder for countless tales in the trade. But none quite like the one between D’Agata (writer) and Fingal (fact-checker), and not just because this epic battle went on for seven years.

Most writers would admit to a bias in favour of well-crafted sentences over clunkier versions that get the mere details straight, but few would cheerfully admit, as D’Agata does, to altering the number of strip clubs in Las Vegas given by a source “because the rhythm of ‘34’ works better in that sentence than the rhythm of ‘31,’ so I changed it.” Nor do most fact-checkers, not even truculent and ferociously keen interns like Fingal, take advantage of a friend’s Vegas wedding to wander the locales mentioned in an article, just to get a leg up on the assignment. With such players taking the stage, small wonder that the to and fro over the very first sentence of the article takes up two pages of the book.

The exchanges quickly degenerate from mutual incomprehension to sarcasm. After D’Agata explains, yet again, that he “streamlined” a quote to “create a bit of resonance—it’s what writers do,” Fingal replies, “Okay, so now I understand. The rules are: there are no rules, just so long as you make it pretty.”

D’Agata: “That’s a bulls–t interpretation of what I just said.”

Fingal: “I thought you were the great defender of people’s rights to ‘interpret’?”

Amusing as all this is, what makes the book compelling is the way the two men eventually develop a wary mutual respect. Lifespan becomes a sustained meditation on the differences, should there be any, between “truth” and “accuracy,” without offering any definitive answers.