REVIEW: The magic of saida - Macleans.ca 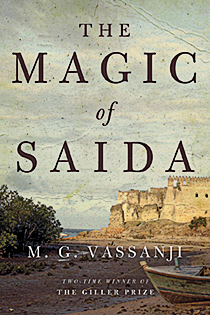 Sometimes a memory so powerful arrives that you suddenly feel like a tourist in your present life. It awakens feelings long forgotten, raw and unresolved. That’s what happens to Kamal Punja, a middle-aged doctor who lives in Edmonton, after an estranged relative reveals a family secret about a woman Kamal knew in his native Tanzania. As Vassanji’s new novel opens, Kamal is in a Dar es Salaam hospital, his search for the woman, Saida, having gone horribly awry. Delirious, Kamal tells his story to a curious stranger, the book’s narrator.

Kamal and Saida are thrown together while growing up in the ancient seaside village of Kilwa. Their mothers are close friends, their fathers are gone—Saida’s is dead, and Kamal’s, an Indian doctor, has disappeared. The children become playmates, escaping to a secret lagoon where they swim and watch boats sail into the harbour. Kamal is enchanted by Saida’s grandfather, the celebrated Swahili poet Mzee Omari, who describes Kamal’s Indian grandfather as a “lion.” After Omari’s mysterious death, Saida is enlisted by her family to work as a mganga, a mystical healer, and stops coming to meet Kamal at the shore. Just as he realizes how much he misses her, he is yanked away, sent to his father’s family in Dar es Salaam to be raised as an Indian.

There is a significant detour halfway through the story in which Kamal speaks directly to the reader, delving into Omari’s history, stretching back to 1890. A rich, if slightly overpopulated, narrative emerges, tracking the arrival of Indian immigrants and the German and British armies to Tanzania. Vassanji manages—elegantly—to evoke both loathing and sympathy for the colonizers and for Omari, who turns out to be more pragmatist than poet. This section becomes the book’s anchor, illuminating the depth and complexity of identity in Tanzania—and in all humans. The faithless are sometimes bravest, reflects Omari’s pious brother, Abdelkarim, while believers can betray. And murky as the past may be, you can almost always count on it to come back to haunt you.