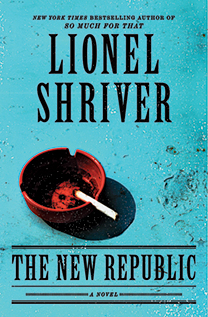 Edgar Kellogg is a thirtysomething former prep-schooled fat kid who never lost his ambition to be “The Man.” When the reader meets the protagonist of Lionel Shriver’s satiric novel, he’s embarking on a financially suicidal reinvention: from well-paid, bored Wall Street lawyer to freelance foreign correspondent for a second-rate rag. His first assignment is in the fictional Portuguese peninsula of Barba, where he’s filling the big shoes of Barrington Saddler, a British journo of legendary reputation who has suddenly gone missing.

The only reason the world cares about Barba, a backwater awash in odiferous prickly pears, is that its homegrown terrorist group, the Os Soldados Ousados de Barba (“The Daring Soldiers of Barba”), or SOBs, is gaining infamy for blowing up stuff internationally, ostensibly to separate from Portugal. Kellogg takes occupancy of Saddler’s grandiose house—and, slowly, his life. As he settles into the viperous nest of foreign correspondents, he sets his sights on the lovely but married Nicola Tremaine who, like everyone else in the godforsaken hellhole, remains in Saddler’s mythical thrall. Soon that includes Kellogg, for whom Saddler’s ghost provokes a chain of events that thrusts him often absurdly into the heart of international terrorism.

To say more would reveal too much of Shriver’s clever plot, which twists and turns nicely, if languidly, around vivid scenes (including a memorable masturbation tableau) and wry observations about love, hero-worship and journalistic delusions. A picaresque novel about terrorism is a bold gambit, one Shriver carries off ably, even if the characterizations occasionally seem arch. Shriver’s avid fanbase should know this is not a new novel: she wrote The New Republic in 1998 but couldn’t summon publisher interest in a comic novel about terrorism until her first big success, We Need to Talk About Kevin, in 2003. But by then, post-9/11 sensitivities had intervened, which is why it hasn’t been published until now. Some will still say, “Too soon.” They likely wouldn’t have enjoyed the delightfully dark romp anyway.