REVIEW: The Oxford Companion to Beer 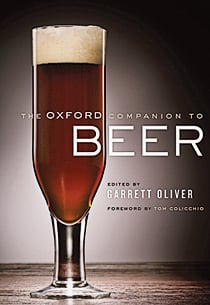 A bumper crop of books has followed the recent proliferation of craft breweries, and this hefty tome is designed to loom over them all. Weighing in at nearly two kilograms—about as much as two pints of ale—it’s a one-stop resource for defining terms, historicizing styles and contextualizing beer business and culture, as well as a new way to settle arguments at the pub.

With over 1,100 entries by 166 contributors, the Companion is an encyclopedia in all but name. Its editor, Garrett Oliver, is brewmaster at the Brooklyn Brewery, one of America’s largest and most esteemed craft breweries, as well as a colourful writer. He pens a polemic in his preface: “Wine, beer’s great rival . . . cannot begin to approach beer’s variety of flavour, aroma and texture.” Indeed, arriving 17 years after the Oxford Companion to Wine’s first edition, this title seeks to lend scholarly legitimacy to beer. Each entry includes a host of facts and figures, but one needn’t dwell on, say, the relative Plato gravity scale measurements of various versions of Scotch ale; there are, thankfully, some juicy bits. You’ll learn, for instance, about the battle between two breweries called Budweiser, the intemperate story of India pale ale, and the beneficence of beer gods—from Sumeria to Asgard. Subjects range from the general (“flavour”) to the historically curious (“Burton snatch”) and the self-referential (“beer writing”).

Brewing history is often murky, and not just because of hazy memories: beers and beer styles alter over time due to the inconstant availability of ingredients, the evolution of consumer taste, technological developments, laws, etc. In brewing, “tradition” is an ongoing process, and this book does an admirably comprehensive job of tracking it.

A number of beer writers have, however, questioned some of the book’s historical details and interpretations of facts—there’s a wiki online to note disputes. Perhaps the second edition will clear these up. For now, one can nonetheless enjoy the book—ideally taken with a grain of malt.