Review: The Patriarch: The Remarkable Life and Turbulent Times of Joseph P. Kennedy 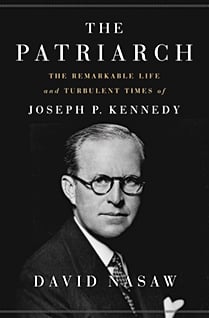 Should we care about Joe Kennedy beyond the fact that he was the father of more famous men? Nasaw thinks so, telling us that “had Joseph P. Kennedy not been the patriarch of America’s first family, his story would be worth telling.” Having already written biographies of other wealthy Americans such as William Randolph Hearst and Andrew Carnegie, Nasaw turns his attention to the story of a lifelong outsider. Kennedy made a fortune in the movie business but, “as an Irish Catholic studio executive in Hollywood,” he was the odd man out. In the FDR administration, he became known as a rogue ambassador for his attempts to prevent America from entering the Second World War. Yet he managed to raise a family of consummate political insiders.

The Kennedy family asked Nasaw to write the book and gave him access to their archive of letters. But despite the family imprimatur, Nasaw doesn’t whitewash Kennedy’s “paranoiac rage” against the Jews (whom he blamed for the fallout from his attempts to appease Hitler) or his decision to have his daughter Rosemary lobotomized. But he does have a generally positive outlook on Kennedy, especially as a father: though the collapse of his own political career made him extremely ambitious for his sons’ future, he comes off as a loving, proud father.

Still, the book suggests that while Kennedy was there when history was made, his achievements themselves aren’t always exceptional; in Hollywood, his fortune came mainly from “feeding the small-theatre audiences’ endless appetite for ‘B’ features”; in the FDR administration, he was a failure. We can feel Kennedy’s last gasp of energy and enthusiasm when he helps John overcome anti-Catholic prejudice and win the presidency, and we have to agree with Nasaw that he “had finally, through his son, accomplished all he had hoped for.”