Review: The People of Forever Are Not Afraid 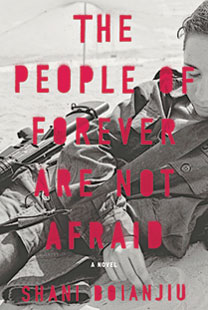 Israeli teenagers aren’t so different. They bemoan the lack of places to host unsupervised parties. They complain about cellphone reception that musters “two bars for, like, 10 seconds.” They daydream about their friend’s older brother. But then—then they join the army to prepare for war, and their boyfriends start getting killed. Boianjiu, Israel’s 25-year-old fiction wunderkind, has written a spectacular first book. It follows three friends from their sleepy settler town through their years of rather inglorious military service and on to their wobbly landing as civilians.

Boianjiu’s plot covers a lot of ground, maybe too much, on the margins of a militarized society, including the plight of Sudanese refugees and trafficked sex workers, a queasy abortion and matter-of-fact military rape. The unrepentantly political book tends toward unsparing criticism of the moral decay of Israeli society. One character, watching another unspool in the wake of her military service, offers the following consolation: “It’s not you. It’s this f–ked-up army; it f–ks you up.” Hence the ability of an otherwise normal person to look at a nearby stranger, imagine a suicide bomber and resign herself to a fiery death. One mordant soldier notes that Israel opens its borders just enough to allow Palestinians to build Israeli houses cheaply, but not enough to respect their dignity. Yet what may look absurd and untenable has become normalized: thus can a sardonic checkpoint officer detain a Palestinian child knowing that an “arrest of a child was always at least page five.”

The book’s tone distinguishes it, elevating youthful musings to the vicinity of high art. The emphatically young and irreverent voices of three Israeli women, alive to the horrors and absurdities of Israel’s state of perma-war, animate this unmistakably serious and ambitious novel. Its characters face the problem of “the future of the past,” bearing the weight of their unwanted experiences. They emerge not quite wise, not quite nihilists, and all too rapidly, young no more.