Review: The Pharoah: Life At Court and On Campaign 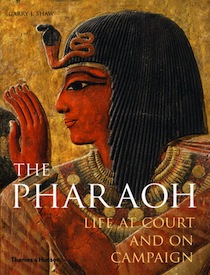 Everyone knows about pharaohs, at least in their role as semi-divine icons of an ancient civilization. The subject of this thoroughly engaging tome, though, is their little-known daily lives—what Egypt’s kings got up to when they weren’t planning a new pyramid or chasing escaped slaves into the Red Sea. Official documents, often carved in stone, record: how the kings rose in the morning, and were ceremonially washed and dressed before attending meetings with officials; their role in law cases; and their evening entertainments. But where Shaw really charms is with the hints of private lives unearthed by two centuries of Egyptology.

He starts at the beginning, describing the specially constructed birthing chambers where expectant royal mothers, surrounded by chanting priests and physicians, squatted on two bricks while drinking beer to ease their labour pains. Then there’s life in the royal nursery, shared with numerous siblings, half-siblings and the children of royal servants, high and low. In some dynasties, princes were as liable to grow up with future fan-bearers as with future high priests: the practice maximized the opportunity to instill early bonds of loyalty in anyone who would later enjoy physical proximity to the pharaoh.

Those ties could last a lifetime. Pharaoh Amenhotep II (1424 to 1398 BCE) sent a letter to his childhood friend, Useratet, now stationed far to the south as viceroy of Kush, telling him how much he had missed him during that day’s festival, when everyone at court had been “eating, drinking and making holiday.” Or so scholars believe Amenhotep is trying to say; the text is so difficult to follow, some think the king was actually drunk when he wrote it. That would be a lovely human touch, colouring a life so remote from our own. It’s matched only by a greyhound, Abutiu, dead for over 4,000 years, whose name is preserved only because of the tomb built for him by his master, an unidentified pharaoh. Not so god-like after all: guys who loved their beer and their dogs.