REVIEW: The Rise of Rome: The Making of the World's Greatest Empire 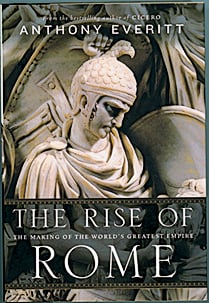 Given Rome’s enormous presence at the roots of Western culture, right down to the very languages we speak, its history will never lose its fascination for us. Thousands of books have been devoted to its millennium-long rise and dominance, decline and fall, so in recent years most historians, specialists and popular writers alike, have focused on ever more narrow slices of its history, in the manner of Robert O’Connell’s superb Ghosts of Cannae (2010), a study of Hannibal’s famous 216 BCE victory, when 48,000 Romans were killed during the single most murderous battle in Western history.

So much detailed work has been done that the door is now wide open for new broad surveys, such as Everitt’s lively and readable account, which examines familiar stories—like those of Romulus and Remus (the wolf-suckled founding twins), Horatio at the bridge, and the expulsion of the kings—in the light of the latest research. Even more than most peoples, it turns out, the Romans liked to think well of themselves: they were quite prepared (proud, even) to record military disasters, but frequently whitewashed the storylines of their more unjust wars.

Roman history has an uncanny ability to resonate with contemporary events, especially in America, another republic exhibiting a similar arc from fringe nation to world power, whose founders modelled many of its institutions—consider the U.S. Senate—after Roman precedents. Everitt, a Briton, deliberately lays out the parallels: the cycle of struggles between rich and poor, all successfully managed by compromise until, at the fall of the Republic, compromise and success both vanished; the slow change from citizen-soldiers to a professional army at near-constant war abroad; the increasing role of vast sums of money in the electoral process. Rome’s rise, he shows, was that of a pragmatic state far more interested in solid engineering, a fair law code and a decent sewer system—infrastructure, in a word—than in the finer points of philosophy and principle. A lesson for the Tea Party, perhaps.