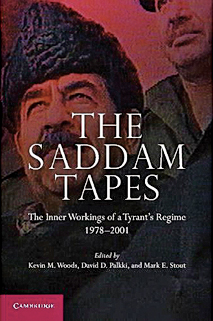 “You are Iraqis and you realize that even the special weapons that the brothers have, if they use it, it will lose its value. Sometimes what you get out of a weapon is when you keep saying, ‘I will bomb you’; better than bombing him, actually.”

Saddam Hussein spoke these words to his inner circle in the midst of Iraq’s war with Iran in the 1980s, almost two decades before the United States finally overthrew him in 2003. If American war planners had had access to that conversation they might better have understood that Saddam’s lack of co-operation with UN weapons inspectors didn’t mean he still possessed chemical and biological weapons, but that he needed his enemies to believe he did.

As it stands, recordings of this conversation, and thousands more between Saddam and his top advisers, emerged only after Saddam was toppled and the invading Americans discovered a treasure trove of audiotapes. Transcripts of a small selection are presented here. The editors and translators involved were dogged and meticulous. The recordings were not all clearly dated and labelled. Sorting out who spoke, and when, must have been an enormous task.

The portrait that emerges of Saddam is of an intelligent, crafty, but also deluded, cruel, and bigoted man. He urged officials to read The Protocols of the Elders of Zion, apparently unaware that it is a fraudulent anti-Semitic text. He advocated distributing heroin to Kuwaiti youth during Iraq’s 1990 occupation of that country, and used murderous counterinsurgency tactics there. “This issue between the Arabs and Israel will never be resolved. It is either Israel or the Arabs,” he fumed. Saddam’s greatest enemy, though, was the United States. He sought to understand it but never really did. “America, comrades, America is not an easy country,” he said. But then neither was Iraq during Saddam’s rule. “We will never lower our heads as long as we are alive,” he once vowed, “even if we have to destroy everybody.”