REVIEW: The Story of English in 100 Words 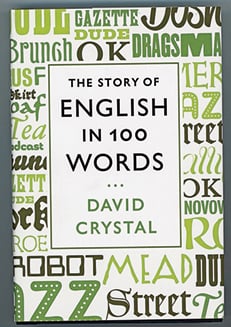 There are only so many ways to discuss the history of a language, notes Crystal, an honorary professor of linguistics at Bangor University in Wales. There’s the broad development approach (Old English, Middle English, etc.), which risks missing some lovely trees for the forest. Or the opposite: just having fun with odd words and phrases (fopdoodle, raining cats and dogs), which can miss the forest for the trees. Crystal aims mostly for the latter, but with due deference to the former: his 100 words, which include the oldest surviving example (“roe,” carved on a roe-deer bone in the fifth century), all reveal something about English’s history and internal logic.

“Debt” illustrates how English speakers sometimes care about the origins of a new word (Latin debitum) and insist upon the “correct” spelling, to the bedevilment of later students. Usage confusion over “uninterested” and “disinterested” stems from English’s varied ways of denoting negativity. In the past, people could be “uncontented” or “discomfortable.” Usually one form eventually prevails, but at times different meanings arise to keep both words alive, even if not everyone is attuned to the new distinction.

Crystal also tackles taboo words, important elements in any tongue, including “one of the very few words known by their initials,” the c-word of female anatomy. It seems to be very old and always very sensitive. After the Norman Conquest, French aristocratic titles took over the native upper class, right up to the wives of earls. But though they were now wedded to countesses, earls remained earls, because, Crystal believes, “count” was pronounced at the time as though it lacked an “o”—and was thus not at all suitable for addressing those with the power to boil you in oil.

As for No. 100, “Twittersphere,” which covers some 600 words coined since 2005, is included mainly as a cautionary presence for the likes of Crystal himself. Seven years ago, he notes, he would have confidently stated there was “nothing at all interesting about the consonant cluster ‘tw.’” The “playful personality” of English, Crystal ruefully concludes, begged to differ.