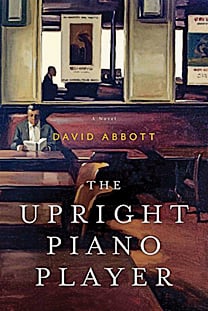 This debut novel is perfectly, maddeningly British, populated as it is by a lonely, horny protagonist, Henry Cage, who brims with clammy repression and polite disdain for most human beings. “Bleeding saintly at work and a bastard at home,” as his estranged son Tom puts it, Cage is ousted from the firm he founded when his executives tire of him. The lull of gilded, forced retirement—including pissy letters to the editor about the BBC—is ruined by the news of his ex-wife’s pending demise from cancer in Florida, and the sudden, cold-water knowledge that he had been a grandfather for four years without knowing it. And he is hounded by acts of malevolence by a violent thief whose girlfriend Cage dares keep his eyes on for a fraction too long at the local brasserie.

As with Ian McEwan’s Saturday, The Upright Piano Player relies heavily on happenstance, and Abbott is nearly as deft as McEwan in suspending the reader’s disbelief. The book’s strength lies in Abbott’s ability to write compellingly about the petty psychodrama of family dysfunction, as well as his intricately webbed storyline, in which memories and backstories are dashed off in his tight, efficient prose seemingly at random.

There’s no sense in calling it a spoiler: the reader knows, by the end of a 14-page prologue set four years after the following 250-odd pages, that even after properly weathering all these travails, Cage will be forever ostracized and miserable through no real fault of his own. What would be overkill in the hands of a lesser author comes off as a bracing paean to the book’s larger theme: that nothing, not happiness and certainly not success, can cut through the enduring misery of chance. How perfectly sad. How perfectly British.