REVIEW: The Weasel: A Double Life in the Mob - Macleans.ca 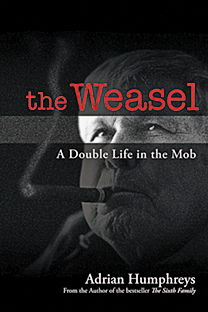 You’d think Marvin Elkind would have wound up in a ditch, barely a footnote in the bloody history of the Mob in Canada. A pudgy, pugilistic Jew with a self-described “big, fat, round kisser” and a wicked tongue, Elkind graduated from reform school punk to loan shark henchman to waiter at New York’s famed Copacabana where, thanks to his dependability, he quickly endeared himself to Jimmy Hoffa. A decent boxer, he took a dive for Meyer Lansky. He became a driver for Montreal don Vic Cotroni. Elkind was forever on the outer edges of organized criminality, big enough to have a job but small enough to forget. The perfect snitch, in other words.

The Weasel—the title comes from the nickname boxer George Chuvalo gave him—documents Elkind’s 20-year career as a professional tattler for the OPP, the RCMP and the FBI, among many others. The breadth of his scores are jaw-dropping; working with his trusted OPP handler, Elkind infiltrated dozens of phony cheque schemes, weapons deals, pornography rings and murder-for-hire plots. He is the reason a planned coup d’état in Ghana in 1987 never materialized, and a group of Libyan terrorists could never make good on their plans to attack Israel. And once the cops swooped in, Elkind would quietly ease back in with the bad guys.

The beauty of The Weasel is in the parsing of Elkind’s motivation to betray those who trusted him most. Elkind says he always did it for the money—he could hardly hang on to the stuff—but journalist and crime writer Humphreys makes the case that the Mob was an extension of Elkind’s disdainful stepfather, an abusive foster mother, and her son who took advantage of him. Like his own family, the Mob never trusted Elkind enough to be anything more than an errand boy—and Elkind made sure everyone paid for this conceit. The Weasel is a delicious, delightful and dirty read about a guy who should have been dead a long time ago.