Review: The Wisdom of Psychopaths: What Saints, Spies and Serial Killers Can Teach Us About Success 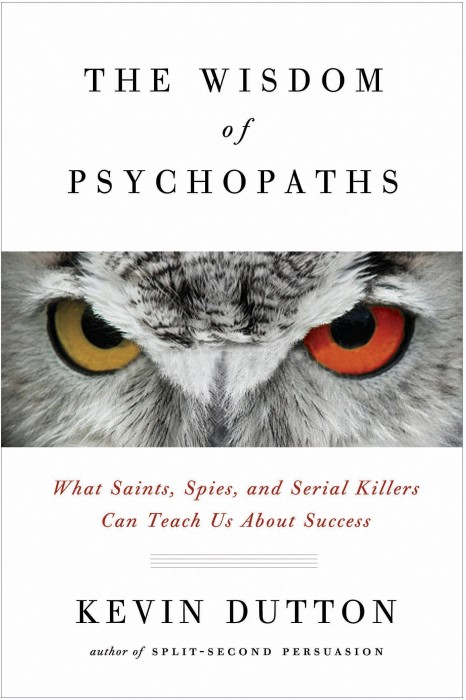 There is no hotter topic in evolutionary psychology than the continuing presence among us of psychopaths. They’re often confused in popular perception with violently irrational psychotics like Norman Bates of Psycho fame, but Dutton’s focus is on men (mostly) more often considered “evil” than “crazy”—characters like cold and calculating Patrick Bateman, the serial killer and Wall Street banker of American Psycho, who are unencumbered by fear, guilt or empathy, and ruthless (if not necessarily violent) in pursuit of their goals. Dutton, an Oxford research psychologist, throws himself with zeal into the question of psychopathy’s persistence—that is, what evolutionary advantages it confers—for reasons both professional and personal: his father, he writes in the book’s first sentence, was a psychopath.

Fear evolved as a survival mechanism during our predator-rich distant past—monkeys with damage to their amygdalas (the brain’s emotional sorting centre) do some very stupid things indeed, including trying to pick up cobras—but too much of a good thing has its problems too. Modern humans are more risk-averse than reckless. Those who score high in tests on psychopathy’s “positive” aspects (fearlessness, stress immunity, focus, social dominance) can flourish—some to our gratitude, like first responders (police, firefighters, military); others (high-octane CEOs, coldly precise surgeons) to a more muted admiration. The disorder’s negative aspects—antisocial behaviour, narcissism, impulsivity—are what fill prisons with psychopaths.

Modern capitalism, Dutton believes, rewards psychopathic attributes in a social sense—useful in saving a child from a burning building (not to mention killing Osama bin Laden)—and economically. A famous 2005 study found psychopathic traits as present in the wealthiest boardroom as in the padded cell, while male employees who scored below average on the “agreeable” index of psychological tests earned about 18 per cent more than their more pleasant peers. Women had less of a monetary split, but the tougher ones still had incomes five per cent higher than those of their softer sisters. The lesson Dutton draws from this is that we should all let our inner psychos shine—just a little.