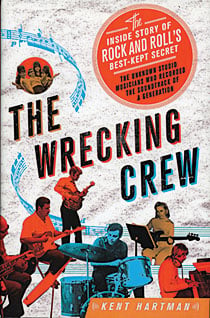 The history of American pop music in the ’60s is partly the history of a bunch of anonymous studio musicians in California. That’s what Hartman argues in The Wrecking Crew, the name that drummer Hal Blaine gave to the session musicians who actually played the instruments on many records credited to famous groups. Under wunderkind producers like Phil Spector, rock records became increasingly complex and divorced from live performance. That meant hiring Blaine, guitarist/bassist Carol Kaye, and other instrumentalists who could sight-read anything and give the sessions a special flair.

Though Hartman has based some of the book on interviews with the Wrecking Crew members, the new information can’t always disguise the familiarity of many of these stories. Even when retold from the point of view of the session players, there’s not much new about Frank Sinatra’s decision to sing “Scooby-dooby-doo” on Strangers in the Night or Brian Wilson’s freak-out after the failure of Pet Sounds. But the book does feature some entertaining anecdotes about the life of a journeyman musician, and one authentic success story: Glen Campbell, who went from being one of the best Wrecking Crew guitarists to becoming an actual star on his own—with help, of course, from Wrecking Crew players like Kaye and Jimmy Webb on Wichita Lineman.

Hartman pays some lip service to complaints about the inauthenticity of these records (we’re reminded that the Byrds complained about not being allowed to play on Mr. Tambourine Man). But mostly, this is a celebration of an alternative pop music world where playing skill, rather than authenticity, is what counts. The actual Beach Boys were inadequate to achieve what producer Brian Wilson wanted; for that, Hartman explains, he needed the Wrecking Crew, “players with the kind of skills that could help him realize on vinyl the full-blown, multi-layered arsenal of sounds he had floating around in his head.”