REVIEW: Thieves of Bay Street: How Banks, Brokerages and the Wealthy Steal Billions From Canadians 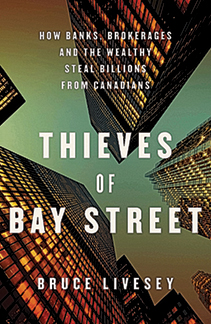 Federal Finance Minister Jim Flaherty likes to boast about Canada’s financial industry, which weathered the 2008 crash better than most. Livesey, on the other hand, says his years working as an investigative journalist for the CBC revealed a much different story. From Ponzi schemers and dishonest brokers to high-profile corporate frauds, Livesey offers up a rap sheet for Canada’s pinstripe set by recounting Bay Street’s long history of shady dealings. “What gets overlooked—as the industry bamboozles the public about its virtues—are the people it runs over in the dead of night,” he writes.

It’s a sobering read, if not exactly a novel one. Indeed, prior to 2008, Canada’s financial sector was increasingly being dubbed a “Wild West” by journalists and foreign critics. But while Livesey doesn’t break much new ground, he manages to deftly weave together dozens of examples, ranging from Nortel Networks to YBM Magnex. He also explores Canada’s connections to the U.S. subprime mortgage market, the asset-backed commercial paper crisis and the brief popularity of income trusts, which he compares—somewhat unconvincingly—to a Ponzi scheme.

Why is Canada so prone to fraud? Bay Street’s clubby culture is one factor. CEOs live in the same tony Toronto neighbourhoods as their boards of directors, corporate lawyers and accountants, and send their children to the same schools. Canadian regulators are criticized for being toothless and seemingly incapable of putting anyone in jail.

It was only when Wall Street’s recklessness caused the U.S. economy to spectacularly implode that everyone suddenly forgot about Bay Street’s seedy underbelly. But nothing really changed, as the fresh scandal surrounding the Canadian-listed Chinese timber company Sino-Forest demonstrates. Policy makers clearly need to be prodded to take the problem seriously. And Livesey does a good job of doing just that.