REVIEW: Up: A Mother and Daughter’s Peakbagging Adventure 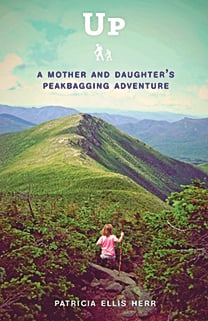 Herr starts off her non-fiction adventure with an anecdote bound to stir up controversy. She’s hiking alone with her two daughters, five-year-old Alex and three-year-old Sage, in the White Mountains of New Hampshire. When a lightning storm hits, Herr sends Alex running for cover and drops her backpack to carry Sage to safety. Alex gets lost for a brief period of time. After they’re reunited and protected by trees, Herr returns for the backpack, leaving her daughters alone for what seems like an eternity. In Herr’s mind the lesson is not to cool it on the hiking until the kids are older, or maybe bring another adult next time (or at the very least leave the three-year-old behind)—but rather that “some things will always be beyond your control.”

Many have questioned Herr’s parenting choices in light of the fact that she and her husband, Hugh, allowed five-year-old Alex to climb all 48 of New Hampshire’s White Mountains that are over 4,000 feet high—so she could become one of the youngest members of the Four Thousand Footer Club, an Appalachian Mountain Club organization.

After getting to know Alex, an intelligent child with self-preservation skills and boundless energy, most will certainly not judge Herr but rather applaud her for recognizing this was something her eldest daughter could and wanted to do. But while Alex can hold her own in dangerous situations, the instances that seem to border on reckless child endangerment concern Alex’s sister. Herr acknowledges that Sage’s enthusiasm for hiking “is counterfeit”—yet mom continues to drag her up mountains. On one trip, Herr had to carry Sage in chest-deep snow.

At times Herr can be too earnest in her lessons to Alex about patronizing adults or why she, a Harvard-educated biological anthropologist, doesn’t work outside the home. But when it comes to writing about summiting mountains, the prose is compelling. Tales of routine stream crossings, slippery terrain and encounters with wild animals are never mundane. And the times when things do go horribly wrong, having a five-year-old at the centre of the storm makes them all the more suspenseful.