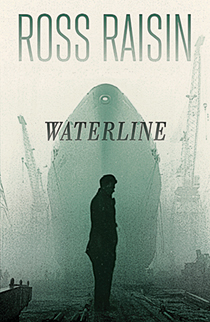 Raisin’s second novel opens along the River Clyde, where the death of shipbuilding in the 1970s left many Glaswegian families adrift. Riveters, caulkers, welders, platers—men whose trades were embedded in their bones—were suddenly without work. Worse, many had plaque in their lungs after years of exposure to asbestos. Sometimes this brought on mesothelioma, a deadly cancer. And sometimes the cancer struck their wives, who also breathed in a daily dose of the stuff, rolling it out of turned-up trouser legs before doing the wash.

That’s what happened to Cathy, Mick Little’s wife. After she dies, Mick sleeps on the floor next to their bed and peers listlessly at old photographs, wondering if the disease had already taken hold when Cathy was just a new mom, tanned and hopeful as she smiled up from her gardening. Soon, Mick takes to the shed in the backyard, reading old newspapers and hiding from the memories in the house. He can’t bear to reach out to his sons and dreads the pitying looks of his co-workers at the taxi garage. Out of money, Mick hocks some of Cathy’s jewellery and gets on a bus for London. He is all alone and terrified, but somehow, right now, that’s as close to comfort as he can get.

Raisin works magic with bleak and disturbing material. His first novel, Out Backward, exquisitely captured the voice—endearing, quirky, ultimately frightening—of a dangerous young delinquent. Waterline chronicles the day-to-day scramble for survival of a heartbroken and destitute old man, someone most people would turn away from on the street. But in Raisin’s hands the story is magnetic, delivered in a playful Glaswegian dialect that radiates Mick’s humour and warmth—he calls do-gooders running a church shelter the “Hallelujahs,” is coy about having a cup of tea in bed (“Sometimes it’s no a tea, but there ye go”), and becomes engrossed in Barbara Taylor Bradford romances. Without ever hitting a preachy note, here is a book that makes homelessness human, sometimes even funny.