REVIEW: What We Talk About When We Talk of War 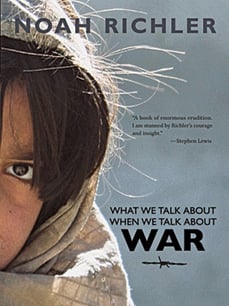 It’s a rare accomplishment to write a book in which even people on the author’s side can find something to quibble with on every second page. That outcome, however, is not only inherent in what Richler wrote, but is the chief achievement of this densely textured work. For his argument is as literary as it is political: it’s about words. He asserts that in the last decade a new, government-inspired, militarized, epic narrative of how Canada came to be and how it ought to act in the world has been roughly plastered across the previous half-century’s narrative: a novelistic, ironically ambivalent, modestly idealistic attachment to peacekeeping.

Richler at times fails to maintain the novelistic ethos he praises and descends into his own crude epic style, dismissing his opponents in the language of contempt, if not violence. (When he condemns former Conservative strategist Tom Flanagan for declaring that WikiLeaks’ Julian Assange should be assassinated, Richler doesn’t actually suggest Flanagan should be shot, but a reader can feel it.) And while the author notes Canadians’ growing self-assurance—perhaps most overtly on display in post-Vancouver Olympics athletic swagger—Richler doesn’t weigh whether muscular patriotism might be another manifestation of it, that the story of the recent militaristic emphasis may be ambiguous.

But these are the quibbles bound to arise in a book about the words we have chosen to describe—and to hide—what we are doing as a nation. And they do nothing to obscure how fundamentally correct Richler is, and what a service he’s done in unpacking those words. The federal government has been using the us-vs.-them language of war for a decade now, ironically enough as much at home (Taliban Jack) as in Afghanistan (killing scumbags). That’s because, as Richler points out, Canadians want an idealistic motive (building schools for girls, say) for war. The result is incoherence about our presence in Afghanistan, and much of the nation simply turning its face away. Six years after the Prime Minister famously promised never to “cut and run” there, we are about to do precisely that. Time, Richler says, to talk about it honestly.