REVIEW: Why Spencer Perceval had to die: the assassination of a British Prime Minister 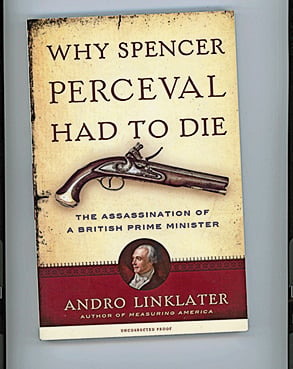 Perceval, the only British prime minister ever assassinated, is known today simply for being gunned down in the lobby of the House of Commons 200 years ago, on May 11, 1812. But Linklater, despite not much liking the victim, makes a convincing case that Perceval deserves to be remembered for far more, that he was a singularly important prime minister, a man, so to speak, well worth shooting. As for the hapless but oddly sympathetic killer, Liverpool businessman John Bellingham, he too has a story worth recording.

Linklater draws a parallel between the assassinations of Perceval and John F. Kennedy: both died in the midst of heightened international tensions (the Cold War for JFK, the long Napoleonic wars for Perceval), and both deaths threw their leaderless governments into panic mode. The author only draws the parallel, however, to highlight a crucial point of difference: Americans reacted with grief to the president’s murder, while tens of thousands of Britons greeted the prime minister’s killing with “the most savage expressions of joy and exultation,” in the words of an alarmed opposition MP.

Perceval was an iron-willed evangelical Christian not above using political guile and dictatorial methods to further his two passions: ending the slave trade and carrying on the struggle against Napoleon—two eventual victories that owe a lot to him. But in the process he wreaked economic devastation, nowhere more acutely than in Liverpool, home to the British slave trade and to John Bellingham. The assassin was no slaver, but a would-be Baltic trader who had been ruined in Russia and failed to gain compensation from his own government. His derangement was real but subtle. At his trial Bellingham tried to explain (rather like Norwegian mass murderer Anders Breivik two centuries later) that he was not guilty of a crime, for he was acting in the interests of justice. The same couldn’t have been said by those who aided Bellingham—and Linklater shows that someone was supporting him—with money that proved well spent. Many of Perceval’s economic measures were quickly dismantled after his death.