REVIEW: Worth fighting for: Love, Loss, and Moving Forward 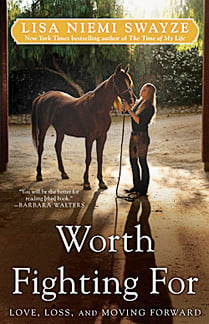 When movie star Patrick Swayze was diagnosed with pancreatic cancer in 2008, he and his wife of 32 years had already survived fame, failure, a miscarriage, his alcoholism, and rehab. “I felt finally beaten,” confesses Lisa Niemi Swayze in Worth Fighting For, a heartbreaking memoir about the battle to save her husband’s life. While this book follows shortly after Patrick’s autobiography, The Time of My Life (2009), co-written with Lisa, there is little overlap. A widow’s sequel about encroaching grief, loneliness and fear, it isn’t for sissies: don’t expect a “can-do” treatise on being a survivor.

Lisa bulldozed through her fear. She was determined to find an aggressive clinical trial for a new drug. She found the right oncologists. When, in the middle of scans, test results, chemo and blocked stents, Patrick shot a TV series, The Beast, in Chicago, Lisa was at his side every moment, handling logistics, transport, nutrition and meds. Her tireless contribution to his care threatens to capsize readers’ sympathy—especially when she convinces Patrick to force A&E to let her direct an episode of The Beast—but she wins us back when she forgets the scorekeeping and describes how Patrick’s illness made her intermittently angry, sad and guilty. This cycle is the same, no doubt, for celebrity spouses and civilians alike. Fame is not a factor when it comes to a “do not resuscitate” order for your spouse.

Patrick’s notoriety may be why readers pick up this book, but it isn’t what keeps them turning the pages. We get caught up in Lisa’s heartfelt contribution to a sad genre—the spouse’s procedural for terminal illness. Still, this particular reader has a note for the book’s editors: shame on you for allowing so many cringeworthy diary entries, ellipses, one-word paragraphs. And. One. Word. Sentences.