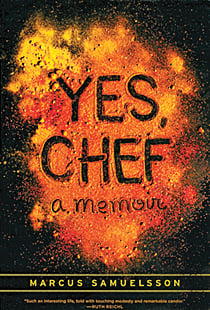 The chef memoir has become ubiquitous enough to deserve its own genre. Marcus Samuelsson, whose culinary stardom began with a coveted three-star review at Aquavit from the New York Times at the age of 24 and was cemented after winning Top Chef Masters in 2010, joins the ranks of these kitchen-fuelled autobiographies. But don’t expect tales of drug-infused benders and profanity-laden prose: besides a dramatic start in life—Samuelsson was born in an Ethiopian village, orphaned at three and hospitalized with tuberculosis—his upbringing, professional rise and current culinary success read as relatively tame, albeit with requisite sides of tragedy and heart-warming surprises.

In 1973, a white middle-class couple from Göteborg, Sweden, adopted Samuelsson and his older sister. Besides the rare racially motivated playground fight, his youth seemed positively idyllic: fishing trips with his father, playing soccer and learning to love cooking, thanks to his grandmother Helga, whose Swedish dishes helped Samuelsson decide he wanted a career in kitchens. Restaurant school and stints in European hotel resorts taught him the classic lessons of Escoffier. Although the desire “to mix cultures and food up” was already rooted, it was Samuelsson’s subsequent work on cruise ships, where he learned new worlds of flavours in ports of call, that spurred him to ask: “Who started the lie that France had the greatest food in the world?”

Settling in New York provided the perfect setting. (His first observation? All the black people. The second? “No one was looking at me differently. No one was looking at me at all.”) But by the time he gets to the real meat—the evolution of his Harlem restaurant Red Rooster, competing on Top Chef Masters and cooking the Obamas’ first White House state dinner—it’s as though Samuelsson has run out of steam, leaving the reader hungry for insider anecdotes. Still, his tale satiates, especially a scandalous phone call from Gordon Ramsay. Suffice it to say, Samuelsson gets the last word.