Who is Rob Delaney?

... and why do people think he's the funniest person on Twitter? 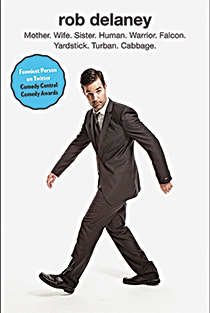 Rob Delaney is Internet-famous. A few years ago, the then-struggling comedian opened a Twitter account and used it to hone his surrealist punch lines, like, “The story of the Titanic speaks to me because I once tripped over a bag of ice at a party & then killed over 1,500 people,” and, “My children annoy me so I’m leaving everything in my will to a nap I took in 2007.”

It’s logical that the most modern incarnation of the one-liner comedian (see Bob Hope, Steven Wright, Zach Galifianakis) would be right at home on Twitter, firing zingers from a 140-character stage. Delaney seems to be fulfilling the “give it to me pithy and give it to me often” demand we’ve developed for news and entertainment—his near 20,000 tweets have landed him close to a million followers. Last year, he won “funniest person on Twitter” at the Comedy Central Awards.

His most famous Twitter follower (or at least the CanCon-iest) is our own lady of letters, Margaret Atwood, with whom he enjoys mildly flirtatious exchanges with tweets like (from Atwood) “But @robdelaney wither art thou this eve? And wherefore?” and Delaney responding by posting a photo of himself peeking over Atwood’s Oryx and Crake with the caption “@margaretatwood You rang?”

This autobiography — Rob Delaney: Mother. Wife. Sister. Human. Warrior. Falcon. Yardstick. Turban. Cabbage — with its appropriately absurdist title, reads like a series of vignettes told by the most charismatic guy at the party.

He muses on personality-shaping events, like illegally bungee jumping off the Manhattan Bridge, the pitfalls of young love and, as is common among his comedic tribesmen, crippling alcoholism, depression and rehab.

It’s a compelling read that blends humility and candour with his trademark batty, dry wit. But like the charismatic partygoer who scrambles to hold your attention after winning a few laughs, not all chapters are created equal: his humorous tales can veer into half-baked territory, some punchlines much sharper than others. But perhaps it’s to be expected that a prolific wisecracker is better at short bursts of funny than at the long-arc comedy yarn. Regardless, it’s a good bath/airplane/weekend read: to peek into a funny guy’s life, experience some empathy and be entertained.