Review: Robert Schumann: The Life and work of a Romantic Composer 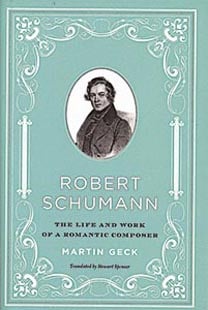 Robert Schumann was more than just another composer with whose music piano students must struggle: he was, Geck writes, one of “the first musicians to receive a proper formal education,” and he spent his life as interested in literature and politics as he was in music. Geck, a German musicologist, analyzes Schumann’s music, including famous pieces like the four symphonies and the Carnaval suite for piano, and recounts the famous events that made Schumann a key figure of Romanticism: his marriage to fellow musician Clara Wieck and his collapse into mental illness. But Geck also concentrates on the everyday society Schumann lived in, and how his music reflects it.

That emphasis means that the book, in Stewart Spencer’s clear translation, is at its best delivering details about the life of a middle-class artist in the 19th century. We learn not only about Schumann’s work as a music critic and editor, but the format of his magazine, its circulation and his “network of contacts between publishers, supporters, writers, local correspondents and subscribers”—almost making a music editor of the era seem like an Internet editor today. And Geck’s description of Schumann’s family life and money issues makes him seem less like a tortured Romantic and more like a typical bourgeois family man.

Geck can’t always clearly show us how Schumann’s seemingly unexceptional lifestyle fits with his battle “against the psychological problems that were a permanent part of his life”; the passion and conflict of his music doesn’t always come through in the text. But by putting him in the context of his time—as a middlebrow musician with big ambitions, a liberal but not a radical—Geck makes it easier to understand Schumann’s music: more daring than his friend Mendelssohn’s, but less revolutionary than his rival Wagner’s. And by writing about a politically volatile time when music was central to German life, Geck creates an understanding not only of Schumann but of an era when music wasn’t just about pretty sounds; it was about “who had the better concept for positioning music within society.”