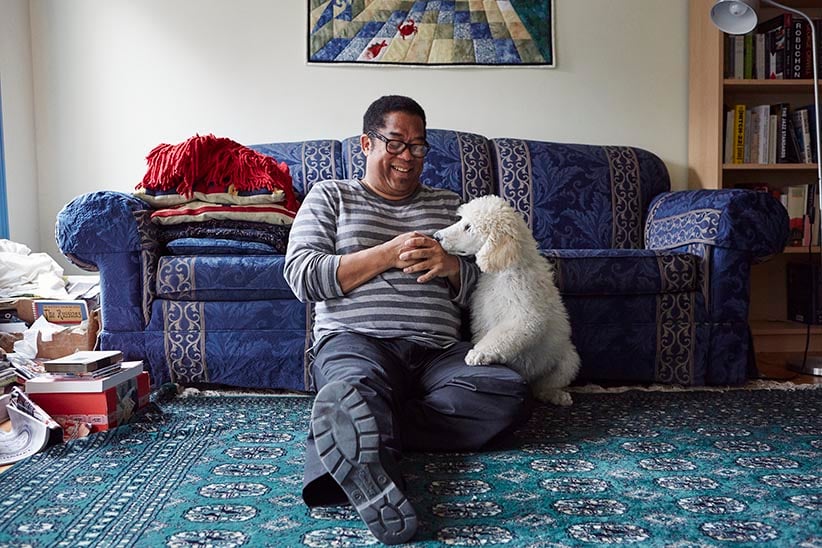 André Alexis has won the Rogers Writers’ Trust Fiction Prize for his novel Fifteen Dogs, which was announced at the Writers’ Trust Awards ceremony in Toronto on November 3. The winner receives $25,000. Each nominee receives $2,500.Maclean’s has published an excerpt from each shortlisted writer, along with their answer to this one question: Have you ever wished you could change something (whether significant or small) about one of your books after it was published? Here is Alexis’s response. Read the rest of the responses from the shortlisted authors here.

One of the reasons I dislike re-reading my own work is that I’ll inevitably find something I’d like to change or that I wish I’d written differently. It’s rare that the rewrites are fundamental. I’m usually happy with my formal choices or with my characterizations. It’s usually this or that sentence that now strikes me as awkward or ambiguous. (Clarity is the big thing for me and I hate it when sentences are unclear.)

Fifteen Dogs is unique, in that I’d like to write a little more about one of the characters – Rosie, the German shepherd. I wish I’d written about her discovery of her “femaleness.” If there’s another edition of the novel, I’d probably devote four or five hundred words to her thinking, to what she feels about power now that she’s aware of her difference from the “males.”

The following is excerpted from Fifteen Dogs, copyright © 2015 by André Alexis. Published by Coach House Books. Reprinted with permission of the publisher.

When Majnoun awakened, he was in a house that smelled of peanut butter and fried liver. He lay in a wicker basket lined with a thick, orange blanket that smelled of something sweet, soapy and human. He tried to move but found he could not. It was too painful and, as well, moving was awkward. His abdomen was shaved and he was bound with white bandages that smelled of oil and pine and something indefinable. His face itched but there was a plastic cone around his head: the narrow end of the cone was cut so that the aperture fit around his neck, the wide end projecting out like a megaphone. Even if he’d wanted to scratch his face, he could not have done so. All four of his legs were shaven and bandaged. He raised his head, the better to see where he was, but he was nowhere: a whitish room with windows that looked out on a sky that was blue and bright.

During his attack – which he suddenly recalled with a vividness that was painful – he had assumed that the darkness he was falling into would be endless. He had given some thought to death in the time he’d been free and he had assumed that his death had come. This whitish room seemed to be proof he was still alive and, unexpectedly, he was disappointed. What was the point of living on after what he’d been through?

Wishing to know where he was, Mahjoun raised his head higher. He tried to call out, but his voice was low and faint and it was painful to bark. Still, he barked as carefully as he could.

Behind him there came the thud of steps.
– He’s awake, a voice spoke. And the face of a human male eclipsed the room.
– How you feeling? the man asked.
The face of a human female jostled the man’s face out of Majnoun’s field of vision.
– You’re so lucky! Aren’t you lucky! Who’s the lucky boy, eh? Who’s the lucky boy?
– I don’t think he’ll be able to get up for quite a while, said the man. I wonder if he’s hungry.
Hungry was a word Majnoun knew well. Using his own language, he clicked, whined and weakly barked out the words that meant he was indeed hungry.
– I know you’re in pain, boy. Try not to get excited, the woman said.
Then, to the man
– I think he’s too weak to eat.
– You might be right, said the man, but let’s see.
The man left the room and returned with a plate of white rice and chopped chicken livers. He put the plate down in front of Majnoun (it smelled divine!), unclasped the plastic cone, and watched as Majnoun gingerly moved closer to the plate and – without sitting up – took in a mouthful of food with a sideways swipe of his tongue.
– I guess I was wrong, said the woman. He is hungry.
– Why don’t you name him?
– You think we should keep him?
– Why not? Once he gets better he can keep you company during the day.
– Okay. Why don’t we call him Lord Jim?
– You want to name him after the world’s most boring book?
– If I wanted to do that, I’d call him Golden Bowl.

Listening to the noise the humans made, Majnoun was reminded of how unpredictably consequential their sounds were. When he’d lived with his family, the humans would make any number of sounds, none of which had anything at all to do with him. Then, from out of the fog of inconsequential noise, something meaningful would come: his name would be called, for instance, and a bowl of food that he had left for later would be taken up or a doorbell would sound, someone would shout, and he, clearly the only one who cared about these sporadic invasions of their territory, would have to bark at the intruder or jump up on it to make certain it was submissive and no threat to any of them.

As he ate his rice and chicken livers, Majnoun paid attention to the humans, ready to eat faster if they reached down for the plate.

– What a good eater! said the woman. What a good dog!
Then, exhausted, Majnoun lay back in the wicker basket. He allowed the man to rub him with foul-smelling goo and refasten the cone. He was asleep by the time they left him alone.