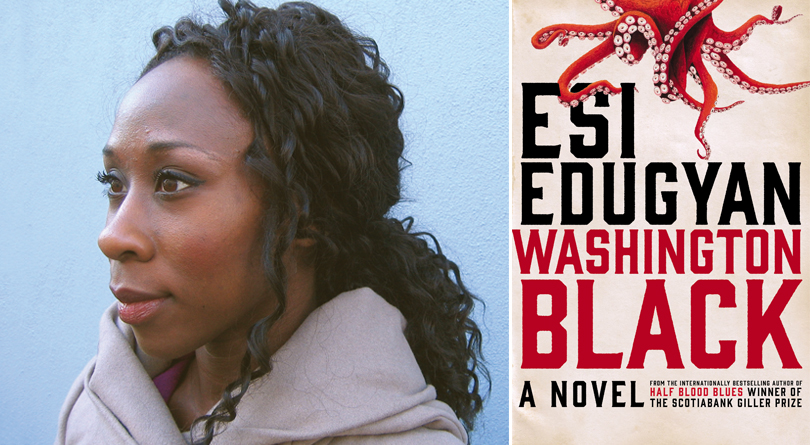 Esi Edugyan is nominated for the Rogers Writers’ Trust Fiction Prize for Washington Black. Her novel, about a gifted youth born into slavery in Barbados two centuries ago was cited by the prize jury for its skilful navigation of “the often-formidable space between history and modern storytelling.” The winner will be announced at the Writers’ Trust Awards ceremony in Toronto on November 7. The winner receives $50,000. Each nominee receives $5,000. During the weeks leading up to the event, Maclean’s will publish an excerpt from each shortlisted writer, along with their answer to this one question: Who are you writing for, who is your imagined or intended reader? Here is Edugyan’s response.

I’m writing for everyone, I feel; there’s no particular demographic I have in mind, or anyone I’m seeking to exclude. Whether a given reader finds the book appealing is another matter, and one that I recognize is beyond my control. But really, I’d say my books are for everyone.

I might have been ten, eleven years old—I cannot say for certain—when my ﬁrst master died.

No one grieved him; in the ﬁelds we hung our heads, keening, grieving for ourselves and the estate sale that must follow. He died very old. I saw him only at a distance: stooped, thin, asleep in a shaded chair on the lawn, a blanket at his lap. I think now he was like a specimen preserved in a bottle. He had outlived a mad king, outlived the slave trade itself, had seen the fall of the French Empire and the rise of the British and the dawn of the industrial age, and his usefulness, surely, had passed. On that last evening I remember crouching on my bare heels in the stony dirt of Faith Plantation and pressing a palm ﬂat against Big Kit’s calf, feeling the heat of her skin baking up out of it, the strength and power of her, while the red sunlight settled in the cane all around us. Together, silent, we watched as the overseers shouldered the cofﬁn down from the Great House. They slid it rasping into the straw of the wagon and, dropping the rail into place with a bang, rode rattling away.

That was how it began: me and Big Kit, watching the dead go free.

His nephew arrived one morning eighteen weeks later at the head of a trail of dust-covered carriages driven directly from the harbour at Bridge Town. That the estate had not been sold off was, we thought at the time, a mercy. The carriages creaked their slow way up the soft embankment, shaded by palm trees. On a ﬂatbed wagon at the rear of the caravan sat a strange object, draped in canvas, as large as the whipping boulder in the small ﬁeld. I could not imagine its purpose. All this I remember well, for I was again with Big Kit at the edge of the cane—I rarely left her side in those days—and I saw Gaius and Immanuel stifﬂy open the carriage door and extend the step. I could see, at the Great House, pretty Émilie, who was my age, and whom I would glimpse some evenings dumping the pans of wash water into the long grass outside the scullery. She descended the ﬁrst two steps of the verandah and, smoothing out her apron, fell still.

The ﬁrst man to emerge, carrying his hat in his hands, had black hair and a long, horselike jaw, his eyes darkened by heavy brows. He raised his face as he descended and peered around at the estate and the men and women gathered there. Then I saw him stride back to the curious object and walk around it, inspecting the ropes and canvas. Cradling a hand to his eyes, he turned, and for a frightening moment I felt his gaze on me. He was chewing some soft-textured thing, his jaw working a little. He did not look away. But it was the second man, the sinister man in white, who seized my attention. This was our new master—we all could see it at once. He was tall, impatient, sickly, his legs bending away from each other like calipers. Under his three-cornered white hat a shock of white hair burst forth. I had a sense of pale eyelashes, an uncooked pallor to his skin. A man who has belonged to another learns very early to observe a master’s eyes; what I saw in this man’s terriﬁed me. He owned me, as he owned all those I lived among, not only our lives but also our deaths, and that pleased him too much. His name was Erasmus Wilde.

I felt a shudder go through Big Kit. I understood. His slick white face gleamed, the clean white folds of his clothes shone impossibly bright, like a duppy, a ghost. I feared he could vanish and reappear at will; I feared he must feed on blood to keep himself warm; I feared he could be anywhere and not visible to us, and so I went about my work in silence. I had already seen many deaths: I knew the nature of evil. It was white like a duppy, it drifted down out of a carriage one morning and into the heat of a frightened plantation with nothing in its eyes.

It was then, I believe now, that Big Kit determined, calmly and with love, to kill herself and me.