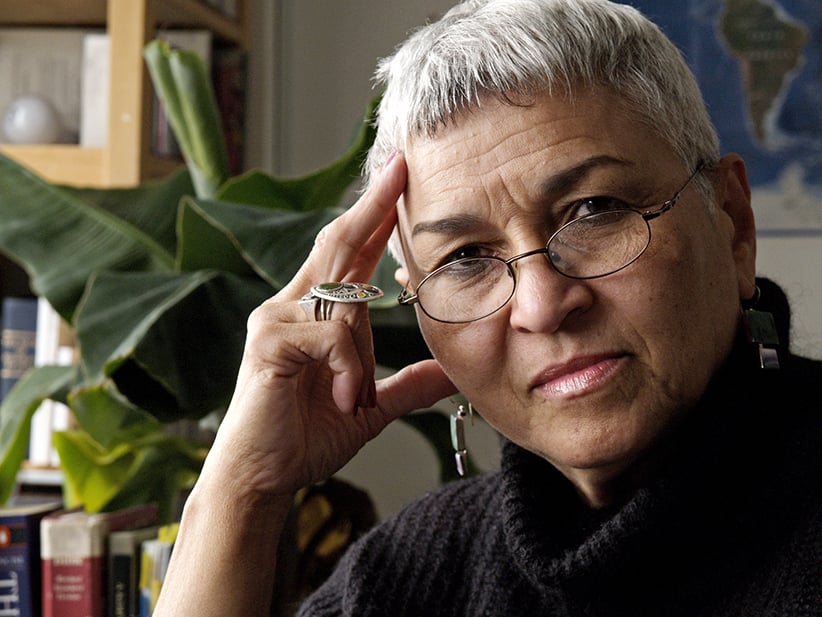 Pamela Mordecai is nominated for the Rogers Writers’ Trust Fiction Prize for her novel Red Jacket. The winner will be announced at the Writers’ Trust Awards ceremony in Toronto on Nov. 3. The winner receives $25,000. Each nominee receives $2,500. Every day until the winner is announced, Maclean’s will publish an excerpt from each shortlisted writer, along with their answer to this one question: Have you ever wished you could change something (whether significant or small) about one of your books after it was published? Here is Mordecai’s response, and here are other responses from other authors.

Red Jacket was originally and for a long time called Cipher. John Jantunen, a wonderful young writer whom I met and read with at this year’s Eden Mills Writers’ Festival, published a novel called Cipher shortly before mine was to be published, and the publisher decided to change the title for that reason – which seems fair enough. The problem is with the alternative we chose, for, as it turns out, there are more than a dozen books on Amazon that have the words “red jacket” as all or part of their title. Also, as I discovered for myself, it isn’t a book that turns up if you search for #RedJacket on Twitter. Mark you, talk de truth, de red and de jacket mean very special tings in my novel…

A small hand is holding ground orchids in yellow and purple, pink and orange! The trailing flowers riot against the dark skin of this little person. As he waves them, the flowers turn into birds.

“It’s a secret, Mama. I can make the flowers fly.”

“That’s amazing Jeremiah, but where the hell is your grandmother?”

“Don’t curse, Grace. You know better than that.”

It is Gramps, and he has called her Grace. Gramps doesn’t know how hard it is. They don’t know, any of them. Only Colin, the red boy who died from kwashiorkor knows, and Sylvia, the yellow-turd girl, and Carlos, her fit-to-be-dashed-away baby. They are the strangely coloured people who belong nowhere, who exist as diversions for God and everybody else. Well, she’s had a baby that she could have dumped. What else is required of her? She has studied hard, worked hard, tried to make the world a better place. Charlie knows. Charlie showed her so many things. She giggles. “More, Charlie,” she says. “I want more.”

There are more costumes, many more revellers. They wear medieval hats, dark gowns with braid and hoods of gold and black, mauve and green. First they march. Some sit above, but most are herded together on benches below. From time to time the herded ones stand up, throw their hats in the air, then sit, and open bottles of effervescing drink, which they spray at one another, laughing. Wave after wave, they stand, sit, and pop open fizzy bottles of white smoke.

There is music, tambu music: penny whistles, drums, fifes, and rhumba boxes accompany a grand procession. There are so many faces passing that she knows. She must try not to be sour and sick. She must join the procession, attend the party, but she is hot all over, full of fire. The man with the rubber gloves speaks. “Grace! It’s me.”

“I figured it out, Jimmy. God is Anancy, a trickster spider. His time’s run out. That’s all. That’s the explanation for the way the world is.”

“There’s a children’s storybook called Waiting for the Thursday Boat in which God is a little black girl. I daresay he could manage to be a trickster spider as well.”

“Don’t get all clever on me, my Jesuit friend. I am sick unto death. I deserve the truth.”

“Pilate asked about the truth, but he walked off before he got the answer. It would have been better if he had waited. Nobody deserves truth; we all wait for it, humbly.”

“I deserve it, Jimmy. I worked and worked. Isn’t that enough?”

“There’s no enough, Grace. There’s not even the best you can do, only what you manage at any given time. Sometimes that’s brilliant; sometimes it’s barely sufficient. It’s necessary to accept that, to recognize limitations, yours, mine, everybody’s; to know that when we get things done together, it’s a bloody miracle; to understand how many miracles have happened every day, go on happening every day, just so we can continue to be here.”