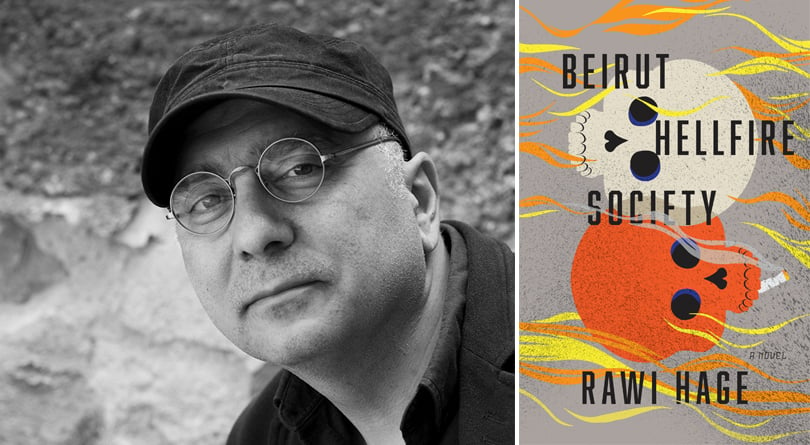 Rawi Hage is nominated for the Rogers Writers’ Trust Fiction Prize for his novel Beirut Hellfire Society, “a powerful exploration of the nature of death and what comes next,” in the words of the prize jury. The winner will be announced at the Writers’ Trust Awards ceremony in Toronto on November 7. The winner receives $50,000. Each nominee receives $5,000. During the weeks leading up to the event, Maclean’s will publish an excerpt from each shortlisted writer, along with their answer to this one question: Who are you writing for, who is your imagined or intended reader? Here is Hage’s response.

I’ve been asked this question many times throughout my writing career, and have always felt a little bewildered as to how to answer. I wonder if the appropriate question might be: Who are you writing against? Who are you trying to undermine, transform, humiliate or love in that exclusive zone of freedom on the page, where only a facsimile of reality exists? To me, the question “Who are you writing for?” suggests that the novelist’s ultimate goal is to produce a work that is narrowly partisan instead of containing multiple interpretations, Manichaean instead of universal, parochial instead of cosmopolitan, and limited to its concern to please.

My feeling is that a novelist doesn’t write for anyone in particular, but for many different possible people and in service of the complex universe the writer seeks to create. To imagine a reader in the act of writing is to put a restraint on your favourite, possibly filthy, improvised character. I believe a novelist writes for the void, and must inhale the whole world fully, in order to substitute it with another.

One sunny day at the start of a ceasefire, a father drove with his son down towards where the fighting had been.

A cadaver had been lying on the ground for days, muti­lated. The son, who was named Pavlov, and his father, an undertaker, loaded the remains into plastic bags and carried them to the hearse. The cadaver’s belly had been opened by a bullet wound and vermin had claimed it and multiplied inside the soft organs, gorging on the entrails. Father and son gathered the scattered items that belonged to the dead: a loose shoe, a bag filled with mouldy food, broken glasses.

Now, the man told his son, you’re sixteen—old enough to become a member of the Society. The Hellfire Society, the father added. He switched on the car radio, and drove towards the coast and then up into the mountains of Lebanon.

They arrived at a secluded area in the high summit, and finally at a small stone house that looked to be abandoned. But the father picked up a key from under a potted plant, opened the door, and together he and his son entered. The house was simple and humble, cold and damp. Neglect and dust could be seen everywhere. The floor was bare, and through the soles of their shoes father and son felt the touch of leather against grains of dirt and sand. Walking across the room was slippery but manageable—two pairs of feet grinding little particles into the floor. The walls of the house were peeling, expos­ing straw mixed with clay, an ancient technique for efficient insulation that the villagers had used for centuries. There was a bed in the corner of the main room and, in the middle, a stove with a chimney that extended its charcoal tube towards the ceiling before the cylinder shifted at the end, a perfect ninety degrees, to reach the top of the adjacent wall and cough out its smoke.

Welcome to the Society’s mansion, the father said.

Pavlov followed his father into the second room. This was a later addition to the house, separate from the main area. Its cement floor was bare and unpolished and the room’s main feature was a large metal door in the centre of the back wall, with a smaller door beneath the large one. Beside the doors, two large gas tanks were linked by tubes. To Pavlov’s eye, they resembled the garden hoses often seen trailing like ser­pents around villagers’ houses.

Eventually we may have to change the pipes, his father said. It’s a simple procedure. You make sure to cut off the gas from its source there—he pointed at a handle embedded in the wall—and before you proceed, lock it firm. Look here, son. You twist this knob on the top in a counter-clockwise motion. Are you cold, son?

In no time this house will burn like hell, his father replied, and smiled. But let’s eat first, and then we’ll bring our unknown soul into the abode of fire, light and eternal warmth.

At dawn, the father woke the son, gathered ashes from the furnace, mixed them with water, and pasted them all over his face and hands.

Pavlov brushed his teeth and washed his face, and went to stand outside beside his father. He was both embarrassed and filled with wonder. It was cold that morning—the cold of soldiers marching towards battle, stomping across farmers’ fields, cold in the way vengeful villagers steal dead soldiers’ shoes after defeat in battle, cold like that rosy dawn in which the wounded trip over vegetables, roots and dead branches, bruised, shot, stabbed and hallucinating of a wedding with a farmer’s girl who will lead them towards their warrior heaven. Pavlov looked at the vast empty mountains while his father chanted. Then his father kissed Pavlov on the forehead, took his hand and led him in another dance, singing in a foreign language. Pavlov danced and smiled, bewildered but surren­dering to his father’s wishes and following his steps.