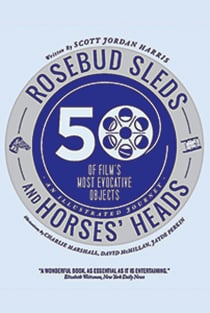 Rosebud Sleds And Horses’ Heads: 50 Of Film’s Most Evocative Objects

As whimsical as its title, this slim book of illustrated observations invites us to ponder the talismanic star power of mere things. They include props and costumes, guns and gadgets, but also more fanciful items, such as the white plastic bag that dances on a breeze in American Beauty and the prosthetic penis worn by Mark Wahlberg’s Dirk Diggler in Boogie Nights. Limiting his gallery to 50 items, British film critic Scott Jordan Harris makes no attempt to be comprehensive. When it comes to classic films, he ticks off the iconic landmarks, from the baby carriage on the steps in Battleship Potemkin to the ruby slippers in The Wizard of Oz. Though he resists ranking his inventory, superlatives abound. Dorothy’s slippers “are probably film’s most fetishized objects.” Citizen Kane’s Rosebud sled is “film’s most evocative object.” No dress is more famous than the white, windblown number worn by Marilyn Monroe above the sidewalk grate in The Seven Year Itch. And, “of all the guns in film, none is more infamous” than the .44 Magnum wielded by Clint Eastwood in Dirty Harry.

Some of the more contemporary picks seem arbitrary. Harris honours the Sherriff Woody doll voiced by Tom Hanks in Toy Story, but could just as well have picked Wilson, the volleyball that kept Hanks company in Cast Away. James Bond’s Golden Gun is honoured, yet his silver Aston Martin is absent from a fleet of conveyances that include the Batmobile, the Starship Enterprise, Kermit’s bicycle, Marty McFly’s hoverboard and the wheelchair in My Left Foot (the author notes he uses one himself). Yet a flair for idiosyncrasy is part of the book’s charm, along with its square, elegant design. Each object in Rosebud Sleds and Horses’ Heads gets a page of text opposite a bold graphic by one of three illustrators, whose styles lean toward naïf caricature and crayon colouring. That accentuates the fanciful nature of the objets, many of which are what Hitchcock called “McGuffins”—plot devices whose substance is immaterial. After all, we still don’t know what was emitting that eerie orange glow from the briefcase in Pulp Fiction.