Salman Rushdie talks about his (sort of) optimistic new novel

Rushdie's latest, 'Two Years Eight Months and Twenty-Eight Nights,' is a meditation on the mutability of the world 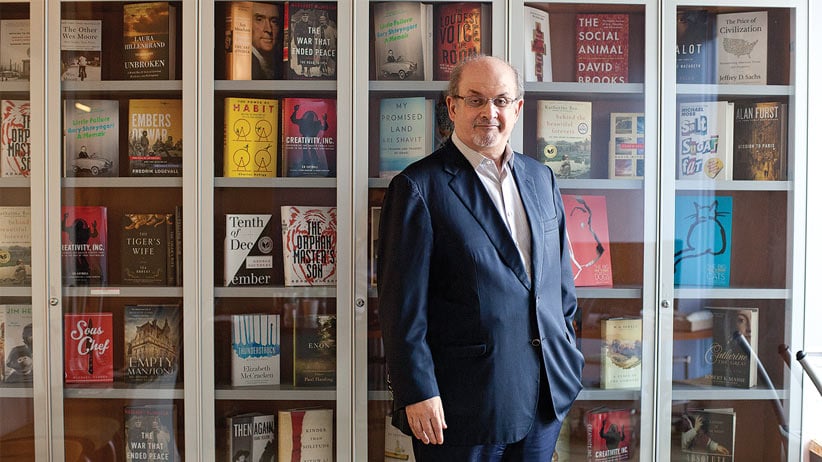 When asked about his July comment to a French newspaper that “we are living in the darkest time I’ve ever known,” Salman Rushdie—who may be the planet’s most famous literary author, if not for reasons he’d like—notes in an interview, almost in passing, that he’s always been inclined to write against the grain.

“The best possible response to tragedy is comedy, black comedy.”

Then there’s the need to release the chokehold on his storytelling drive—after the fact-heavy labour of his 2012 memoir Joseph Anton, says Rushdie, “I am so over non-fiction, so ready to make things up”—and, as the death threat for penning 1989’s The Satanic Verses receded, his more nuanced view of the battle between reason and unreason developed.

Toss them together, and the impetus behind Rushdie’s new novel becomes as clear as the result. A rollicking, funny and (sort of) optimistic fantasy about what the book refers to as our days of “strangenesses,” Two Years Eight Months and Twenty-Eight Nights—1,001 nights, that is—is perhaps his finest work since Midnight’s Children won the Booker prize in 1981.

The story opens more than 800 years ago, mostly takes place in the present, and is narrated from the perspective of a thousand years in the future. Ibn Rushd, better known in the West as Averroës, was one of medieval Islam’s greatest philosophers; his works inspired Salman Rushdie’s father to change his surname. Here, he has just lost a war of words with a long-dead rival, Ghazali, whose fundamentalist religious views have won over Averroës’s caliph. Death is not a barrier to intellectual combat, not when a novelist doesn’t want to let go of characters, Rushdie allows: Even in the 21st century, he has the two arguing from their graves; when Ghazali scores a point, he laughs, in one of the novel’s loveliest lines, “like only dust can laugh.”

Sent into small-town exile, Averroës takes up with Dunia, a female jinn (or genie, in standard English), and an exceedingly fertile one—a minimum of seven healthy babies delivered per pregnancy—at that. In one of Rushdie’s frequent digs at himself, Rushd, “as a man of reason,” is utterly incapable of recognizing Dunia as something undreamt of in his heaven or Earth.

In present-day New York, an unprecedented storm (think 9/11 plus hurricane Sandy) opens the passages between the jinn and human world, and powerful jinn—some shrewdly exploiting the power of human religious fear—pour through to wreak destruction. Ultimately, it’s Dunia’s brood of descendents who rescue humanity. Known as the Duniazat, they could have been called the Rushdie after their father, of course, “but that would be obvious,” the writer says dryly. As for their ability to shoot devastating bolts of electricity from their fingertips (inherited from their mother, a lightning princess), that is a metaphor for their creator’s storytelling gifts, too. “Oh, I definitely have the lightning bolts,” laughs Rushdie.

It all turns out surprisingly well, although there are portents, a millennium hence, that victory came at an insidious cost. On the way there, the author has fun with characters major and minor. There’s Storm Baby, an abandoned Duniazat child, who renders great service to the mayor of New York by going “all medieval” on liars, causing their skin to start rotting as soon as they speak an untruth. (She doesn’t encounter any storytellers, though, so Rushdie’s hope that “she can distinguish between the kind of lie that is in a novel and the kind that comes out of the mouth of Donald Trump” is not put to the test.) An avant-garde composer’s pugnacity and venomous wit will remind readers of Christopher Hitchens—wrongly, it seems: “You’re not the first to say that, but I had Harold Pinter in mind.”

Underneath is a novel of ideas, a meditation on the mutability of the world, how solid ground can simply dissolve. Rushdie is no friend to religion, which he includes in the irrational side of humanity, but unreason’s hallmarks also include “imagination, dreams and much else that makes life joyful. My books are full of the fantastic. I would have some difficulty with which side would have my vote. Do I contradict myself, as Whitman said? Very well, then, I contradict myself.”