How humans will survive a mass extinction

Our review of Annalee Newitz's book, 'Scatter, Adapt, and Remember' 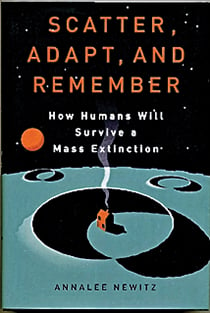 What makes life on Earth, our only home (so far), so lively is exactly what makes it so deadly: the planet’s inherent instability. Over its 4.5-billion-year history, Earth has been smothered in greenhouse gas emissions, choked by ice, bombarded by cosmic radiation, split open by megavolcanos, and—as if the planet’s own dangers weren’t enough—hammered by the neighbours, too, in the form of that dino-killing asteroid 66 million years ago. In the last half-billion years alone, there have been five mass extinction events. Each time 75 per cent or more of all species died out in less than a million years, a geological blink of an eye. In one, the cheerfully named Great Dying, the species death toll hit 95 per cent 252 million years ago. One way or another, rapid climate change, too fast for most creatures’ adaptive reactions, was always the culprit.

Ninety-five per cent, however, is not 100, as Newitz stresses. There have always been survivor species, and from our earliest evolution humankind has borne the marks of one. Like sharks, another great survivor, we are natural wanderers (the Scatter of the title); who will “eat any old crap,” as Newitz sums up the human and shark diets (Adapt). Lately—the last 100,000 years or so—we’ve added something even more useful to our survival kits: memory. We know what’s happened before and what will surely come again.

And that’s where this engaging account of past catastrophes becomes arresting. If we’re going to last long enough to get off this murderous hunk of rock—the ultimate scatter—we will need to give up our mindless fossil-fuel addiction and our ecological dreams of restoring untouched nature (since it’s nature that’s trying to kill us). We have to actively manage the planet, argues Newitz. And from geoengineering to regulate sunlight to crafting living cities, half-constructed and half-natural, we’d better get going.