Science fiction, in the literal sense of the term 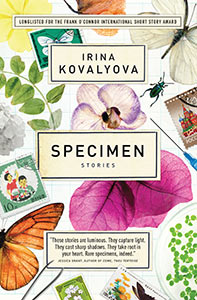 The first thing you learn as a scientist is that the universe doesn’t care about you. It doesn’t reward hard work, let good ideas rise to the top, or bend to the power of positive thinking. It just is. Characters in this debut short-story collection inhabit a cold, indifferent universe and learn to make their way. In calm, precise and understated style, unburdened by metaphor or reflection, the high drama of an I Didn’t Know I Was Pregnant scenario unfolding in a laboratory bathroom (“Mamochka”), or a teenager detonating a secret about her identity (“Specimen”), stands on its own merits.

The gem of the collection is the intergenerational love story “Gdansk,” where geopolitics, science and love collide in a nine-page bulleted list that make it plain why more authors don’t structure their stories this way: because it must be terrifying to put your work into the world with all the unscientific niceties stripped away. “Peptide p,” written in the form of a scientific report, is terrifying in its plausibility, a fictional case study—complete with charts and graphs—of a cardiovascular disease found in children who’ve eaten tainted lab-grown meat.

The influence of Russian writers shines on every page (Kovalyova, a doctor of microbiology and a lecturer at Simon Fraser University, is Russian-born). Vladimir Nabokov’s hapless professor Timofey Pnin could have strolled into almost any scene and fit right in.

Specimen concludes with a tightly crafted novella about a budding young botanist whose pathologist father receives a strange invitation to help preserve the body of Kim Il Sung. Some time later, he sends his daughter a cryptic letter suggesting she join him in Pyongyang as an exchange student; it would be a rare opportunity to study in the Dear Leader’s opulent private gardens. “Something’s the matter,” the girl’s grandmother intones. What follows is a high-stakes rescue mission involving rare orchids, dog meat and, eventually, love. The tale shimmers with menace without ever being grotesque. Kovalyova captures perfectly what must be the grinding effect of living in a constant state of bureaucratic frustration and low-level paranoia.

This is science ﬁction in every possible sense. It’s set in the world of science—fruitful and underexplored territory—and written with a detached, straight-shooting, almost amoral sensibility. But, like the scientist she is, Kovalyova seems to have little patience for subjectivity or the un-pin-downable quality of heart. Specimen is a technical marvel, but almost too intelligent for its own good.