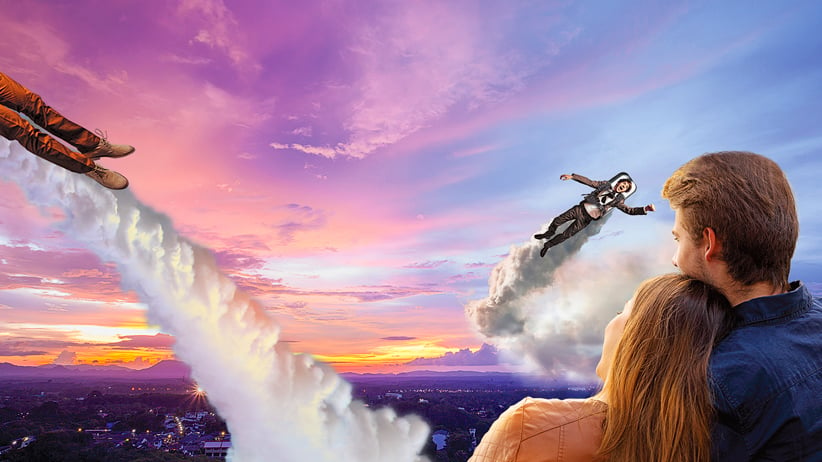 Have you heard about the terrific new book called The Future and Why We Should Avoid It: Killer Robots, the Apocalypse and Other Topics of Mild Concern? I can’t recommend it highly enough—though I’m going to keep trying because it’s my book and I need the royalties to fix a hole in my porch.

For more on this exciting masterwork that critics could theoretically describe as “humanity’s greatest achievement, and that includes pajama jeans,” I have reached the author (i.e. me) at his/my home in Ottawa, 19 years into the future.

SF: Let me start with the question on everyone’s mind here in 2014: In your time, how many blades have they crammed into a razor?

SF 2033: Actually, Gillette went bankrupt in 2025. In the end, it was the charity-industrial complex that did them in. It just kept expanding. These days, most men go from Octobeard to Movember to Desideburns.

SF: Don’t you get sick of having facial hair all the time?

SF 2033: It gets a little annoying around FebManchu. But what are you going to do? It’s for 12 consecutive good causes.

SF: I have to ask: how many Nobel prizes do we wind up winning for our book?

SF 2033: Here in the future, we have evolved beyond petty literary competitions and prizes.

SF: So you’re saying we lost?

SF 2033: There was just no beating Marmaduke that year. Those Swedes are suckers for canine mischief. Plus, the judges did not buy our spin that the more words there are in the title, the better the book.

SF: But that’s just math! Does the book at least get optioned by Hollywood and made into a major motion picture starring George Clooney as chapters one through six?

SF 2033: No, but I did see one homeless guy use it as a pillow at the library. Gave it two out of five on Yelp.

SF: It’s weird to be able to talk to myself like this. Question out of curiosity: I’ve got no fallback option and need to earn a living from the magazine and book industries for the next 20 years. How does my plan work out?

SF 2033: Sorry, could you repeat that? Rush hour is really the worst time of day to be living under this bridge.

SF: Do you at least have jet packs in the future? Please tell me there are jet packs.

SF 2033: Of course there are jet packs! But here’s something we never considered when dreaming about jet packs for our entire lives: only rich people can afford them. You haven’t experienced the future until you’ve had a glorious sunset spoiled by two trust-fund douchebags doing sky doughnuts.

SF: Couldn’t we have saved up?

SF 2033: We actually rented one for a weekend, but you’d be surprised—the insurance premiums really start to soar once you crash through two or three blimps.

SF: We posit in the book that humanity’s time will end with the rising up of sentient machines of our own creation. Any sign of the dawn of the Robocalypse?

SF 2033: Not yet. But my robot butler has been asking a lot of questions lately about where I keep my pancreas.

SF 2033: Let’s see. The Leafs still haven’t won the Cup, Nickelback was eaten by a tiger and all Canadians now celebrate a new statutory holiday every April 8: Tiger Appreciation Day. Oh, and Stephen Harper is still living at 24 Sussex.

SF 2033: No, he just refused to move out when he lost. They ended up letting him stay. Mostly he sits in the window hollering, “Troubles lapping!” at the squirrels.

SF: How do we end up doing in our battle against climate change? Do we come together in common cause to ultimately reverse this existential threat?

SF: It doesn’t seem like there’s a lot to look forward to.

SF 2033: I ask you: When has the future ever turned out to be anything other than the perfect utopia we all envision?

The Future and Why We Should Avoid It is now available wherever throw pillows, candles, lattes, picture frames, blankets and, somewhere way in the back, books are sold.