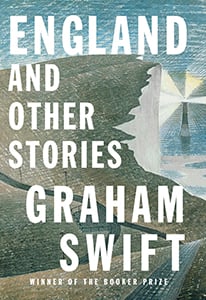 England and Other Stories

Stock-taking retrospection has been a key motif in Swift’s writing, from Waterland to Last Orders. And those pensive recollections are typically less of the rose-coloured “Remember the good times?” variety than sombre, as in “How did I wind up here?” As an author who once described writing as an occupation that can be “grim, lonely, miserable, desperate and wretched,” the 66-year-old Swift has a morose outlook that’s perhaps not unexpected.

Comprised of 25 stories set from 1649 all the way to the 21st century, England features a prominent number of older men and women looking back. Typically successes, in the sense of having reached beyond humble origins, they’re hardly satisfied. Swift’s characters, Englanders all, often register as bemused by the way life has unfurled for themselves and others. And awareness of growing infirmities and the brute fact of mortality shadow their minds. In “First on the Scene” a widower lawyer with Parkinson’s discovers a woman’s corpse while covering territory he’d formerly hiked with his wife. Waiting for the authorities to arrive he thinks, “What a terrible thing it can be just to be on this earth.”

A sense of dimming, of possibilities quickly shrinking, pervades the stories. A lawyer facing bad medical news has an aha moment—“He was trying to take in the fact that his life was no longer the indefinite thing of which he’d always been the subject, it was a closed thing, a ﬁnite thing, an object”—before returning to work with a stoic philosophy, as though the only dignity left to him is saving face. Even love offers the smallest of consolations: “Remember This” begins with a besotted newlywed trying to compose one perfect love letter that “would be there always for her, enduring as a will.” Despite the heartbreaking passage of time (“The truth is they separated. Then they needed lawyers, in duplicate, to decide on the settlement and on how the two children would be provided for.”), he holds on to that letter.