One of the advantages of age is being able to laugh at your own youth –which Cockburn does in his new memoir. 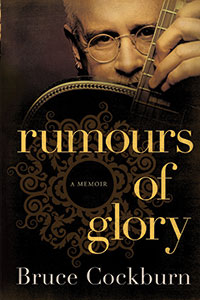 Sex, guns and God—probably not what you expect from a Bruce Cockburn autobiography. Well, maybe the God part, if you were a fan of the Canadian musician’s work during the mid-’70s, his most explicitly Christian period. You might not know about his love of firearms or his erotically charged—okay, perfectly normal string of failed relationships, which he writes about candidly. You might, however, be surprised this book even exists, considering Cockburn’s ambivalence about his own fame. When his first album came out in 1970, he heard it played in its entirety on CHUM-FM as he walked around Toronto’s hippie enclave, Yorkville. “Most performers would have been thrilled. I was terrified. I thought, ‘I’m never going to have privacy again!’ ” Yet, here he is, 44 years later, with a memoir about, as he puts it, “making music, making love, making mistakes, making my way across this beautiful and dangerous planet.”

A surprisingly large portion of his book portrays a man who came to Christianity as an adult, after dabbling in the occult, and whose ever-evolving understanding of faith and the Divine manifests itself in every aspect of his life and art. He is a searcher; his songs are often reportage of his travels, philosophical and physical. But there is also some juice here. His first album was funded by a shady drug dealer. At a concert in Italy, armed men suddenly started moving around his equipment, mid-song; there had been an anarchist bomb threat.

It’s hard to imagine a more Canadian memoir: a serious, self-righteous, self-deprecating and quietly talented artist who purposely avoided pursuing success outside Canada until he landed a Top 40 hit in 1979, Wondering Where the Lions Are. (That gave his U.S. record-label head a few strange promotional ideas—including “showing up at a radio station with a lion on a leash, scaring the s–t out of everybody.”) Cockburn’s marriage fell apart because, he says, he was “unable to adequately express feeling.” That would probably do it, yeah.

If you’ve ever heard a Bruce Cockburn song, you know he’s earnest—often to a fault. Here’s a guy who admits, when writing about his not-so-wild youth: “In my mind, life was too serious and weighty to actually be ‘fun.’ This outlook set in toward my teens and didn’t dissipate for the next 30 years.” When did that change, exactly? He doesn’t say. But one of the advantages of age is being able to laugh at your own youth—which Cockburn does. Earnestly, of course.